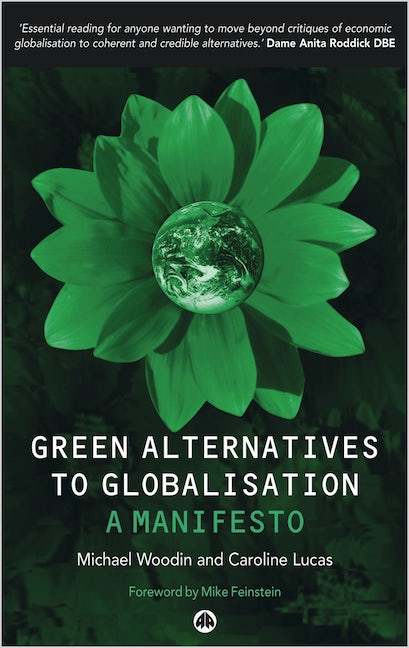 A guide to Green political perspectives on a range of key contemporary issues, including the environment, security and globalisation.

What are the Green alternatives to economic globalisation?

Written by leader of the Green Party, Caroline Lucas, this manifesto argues that globalisation increases poverty, undermines democracy, and destroys the environment, the authors demonstrate the urgent need for a new approach - economic localisation - that is based on the Green principles of equity, ecology and democracy. Applying their thesis to current international crises, including climate change, trade and development, agriculture, and international security, we see how economic localisation could be adopted and applied to positive ends.

Michael Woodin sadly passed away in 2004 and is much missed by his friends and colleagues in the Green Party. He was Principal Speaker of the Green Party of England and Wales and was elected as Oxford's first Green City Councillor in 1994. He also lectured in Psychology at Balliol College, University of Oxford.

Caroline Lucas is the Co-Leader of the Green Party of England and Wales. She is the first and only Green Member of Parliament (MP).

'We stand at a crucial point in history. One future leads to spiraling inequality, insecurity and environmental decline - another road heads toward sustainability. Most of our elected representatives know only one way ahead - the way of corporate globalisation. So here is the exception, not more anti-globalisation or pro-globalisation, but a genuine alternative that promotes policies for people and the planet. If more politicians thought like this, we would live in a far better world' - Tony Juniper, Executive Director, Friends of the Earth (UK)

'Policy makers are trying to make failed economic theory work, like farmers trying to milk a dead cow. Caroline Lucas and Mike Woodin know its time to move on and try something different. Here is proof that there are alternatives' - Andrew Simms, Policy Director, New Economics Foundation