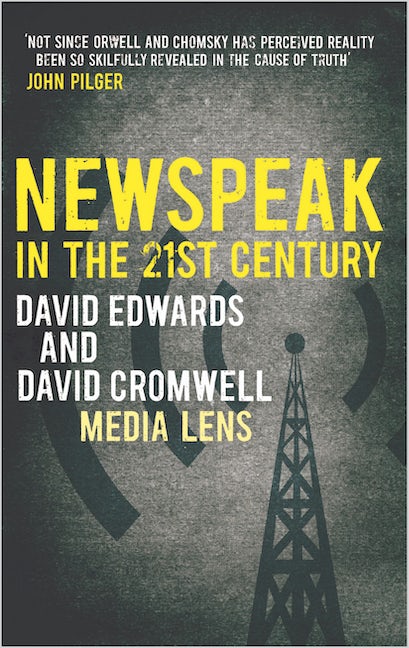 NEWSPEAK in the 21st Century

Exposing the liberal media as cheerleaders for government, business and war
Media Lens' mission is to correct the distorted vision of the liberal media. A thorn in the side of the Guardian, Independent, Channel 4 and the BBC, among many others, it is constantly under counterfire by those it attacks.

These responses are collected in Newspeak. They expose the arrogance and servility to power of our leading journalists and editors, starring Andrew Marr, Alan Rusbridger, Roger Alton, Jon Snow, Jeremy Bowen and even George Monbiot.

Packed with forensic media analysis, revealing the lethal bias in 'balanced' reporting. Even the 'best' UK media turn out to be cheerleaders for government, business and war.

Alongside an A-Z of BBC propaganda and chapters on Iraq and climate change, Newspeak focuses on the demonisation of Iran and Venezuela, the Israel-Palestine conflict, the myth of impartial reporting and the dark art of smearing dissidents.

'Regular critical analysis of the media, filling crucial gaps and correcting the distortions of ideological prisms, has never been more important. Media Lens has performed a major public service by carrying out this task with energy, insight, and care' - Noam Chomsky 'Media Lens is doing an outstanding job of pressing the mainstream media' - Edward S. Herman 'In telling us the unvarnished truth, Media Lens is the best thing to happen to the British media for as long as I can remember' - John Pilger
1. No Conspiracy - Solving The Propaganda Puzzle
2. BBC Balance - The Magnificent Fiction
3. Back-To-Back Bias - An Incomplete A-Z Of BBC Propaganda
4. Climate Chaos - Keeping Madness Mainstream
5. Plan A/Plan B - The Downing Street Memo
6. Mind Your Methodology - Killing The 2004 Lancet Report
7. One Million Dead And Counting - The 2006 Lancet Report And Beyond
8. Bitter Harvest - Suicide Bombings In Britain, Spain And Iraq
9. Israel & Palestine - An Eye For An Eyelash
10. Real Men Go To Tehran - Targeting Iran
11. Iran In Iraq
12. Venezuela - Dousing The "Firebrand"
13. Liberal Press Gang - Behind The Scenes At The Independent And The Guardian
14. Brilliant Fools - Snarls, Smears And The Dark Art Of Willy-Waving
15. Compassion, Awareness and Honest Journalism
References
Index
Published by Pluto Press in Aug 2009
Paperback ISBN: 9780745328935
eBook ISBN: 9781783710690