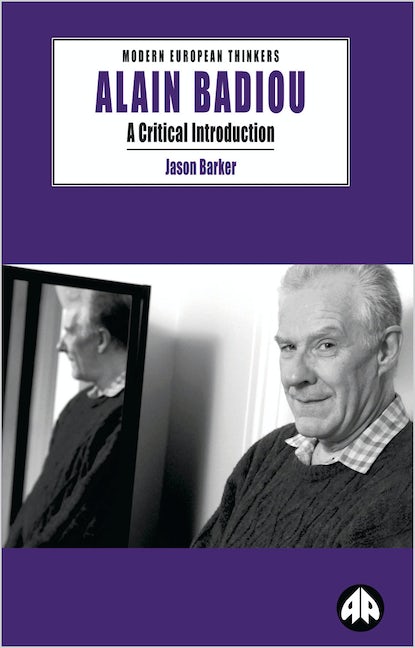 A clear and concise introduction to the political philosophy of Alain Badiou, centred in a political context
Alain Badiou is rapidly emerging as one of the most radical and influential philosophers of our time. Badiou opposes the contemporary reduction of philosophy to nothing but a matter of language and premature announcements of the end of philosophy and thus sets himself against both analytic and continental modes of philosophy.

Setting the traditional platonic concerns of philosophy, truth and being, against the modern sophists of postmodernism, Badiou has articulated a powerful systematic philosophy with profound ethical and political consequences.

Jason Barker is a freelance writer who is currently translating Badiou's 'Abrege de Metapolitique' for Verso books. Alain Badiou is Professor of Philosophy at Université de Paris VIII (Vincennes at Saint-Denis) and is also Conference Director at the College International de Philosophie. He has published many books including novels and political texts. Manifesto for Philosophy, Deleuze and Ethics have already been translated into English.

'The best account of [my work's] political trajectory' - Alain Badiou 'A nuanced and stimulating invitation to the work of Alain Badiou' - Alberto Toscano, Radical Philosophy
Abbreviations
Introduction
1. Maoist Beginnings
2. The Science of Being
3. The Event of Non-Being
4. The Politics of Truth
5. The Cult of Deleuze
6. The Ethics of Philosophy
Appendix
Notes and References
Bibliography
Index
Published by Pluto Press in Dec 2001
Paperback ISBN: 9780745318004
eBook ISBN: 9781783713219