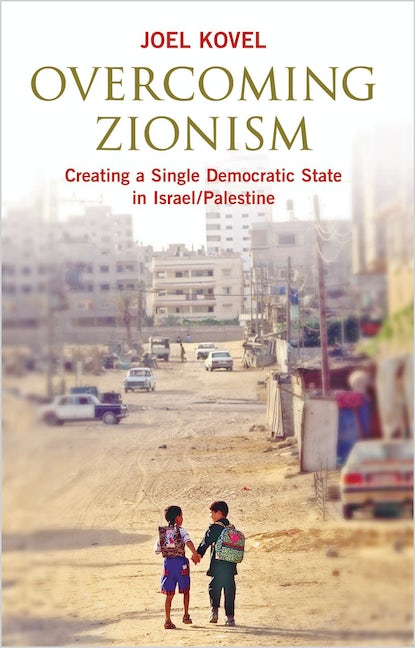 A sensitive and insightful critique of the contradictions of Zionism.
Israel is an incorrigible human rights offender because, by discriminating against Arabs, it is guilty of 'state-sponsored racism' argues Joel Kovel. Like apartheid South Africa, the best hope for peace in Israel is to return to the idea of a one-state solution, where Jews and Palestinians can co-exist in a secular democracy.

Kovel is well-known writer on the Middle East conflict. This book draws on his detailed knowledge to show that Zionism and democracy are essentially incompatible. He offers a thoughtful account of the emotional and psychological aspects of Zionism that helps us understand the relationship between ideology, culture and political processes.

Ultimately, Kovel argues, a two-state solution is essentially hopeless as it concedes too much to the regressive forces of nationalism, wherein lie the roots of continued conflict.

Joel Kovel has served as a professor in Psychiatry, Anthropology, Political Science, Social Studies and Communications. He was editor of Capitalism Nature Socialism and is the author of The Enemy of Nature (Zed, 2007), Overcoming Zionism (Pluto, 2007) and Remaking Scarcity (Pluto, 2007).

'An impressive, important book. If persons following the current discussion and concerned about the problems of Jews and Zionism and Israel and the Middle-East, even world peace, could have but one book on the subject on their shelf, it should be this one' - Media Lens 'Absolutely fundamental for those who reject the unfortunate confusion between Jews, Judaism, Zionism and the State of Israel - convincingly argues in favour of a single secular state for Israelis and Palestinians as the only democratic solution for the region' - Samir Amin, director of the Third World Forum 'Joel Kovel's uncompromising criticism of Zionism is rooted in a very deep feeling of empathy and solidarity with his fellow-Jews caught in the death-trap of the Zionist adventure. The way out Kovel is suggesting - a bi-national Israeli-Palestinian state - may be challenged, but definitely not ignored' - Michel Warschawski, former director of the Alternative Information Centre in Jerusalem
Prologue
Part One COMING TO ZION
1. A People Apart
2. The Unnatural History of a Bad Idea
3. The Spectre of Shoah
Part Two THE JEWISH STATE
4. The Only Democracy in the Middle East
5. Facts on the Ground
6. Partners in Zion
7. Bad Conscience and State Racism
8. Slouching Toward Jerusalem
Part Three ZIONISM OVERCOME
9. Beyond the Two-State Solution
10. Palesrael: A Secular and Universal Democracy for Israel/Palestine
Bibliography
Index
Published by Pluto Press in Feb 2007
Paperback ISBN: 9780745325699
eBook ISBN: 9781783715930