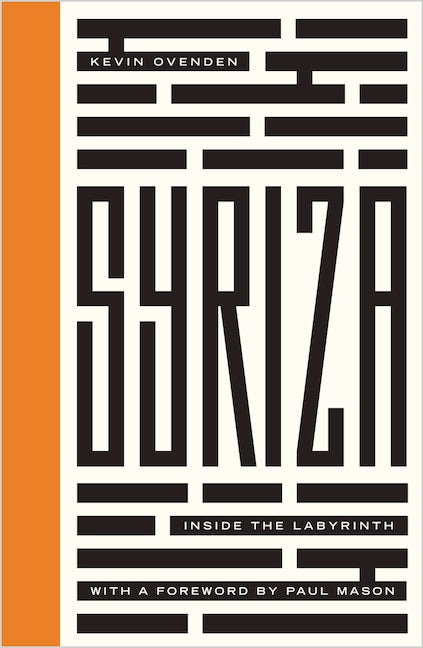 A political overview of the rise and victory of Syriza in Greece, with historical analysis.

* Shortlisted for the Academy of British Cover Design Awards, 2015*

Greece's recent political turmoil captured the imagination of the left across Europe. Elected in January 2015 under the leadership of Alexis Tsipras, the radical Syriza party sought to challenge the European economic status-quo and secure a better future for the Greek people. The fierce confrontation with Greece's creditors which followed reverberated around the world.

Kevin Ovenden tells the rocky story of Syriza's first six months in office. Despite the party's many defeats, the rise (and fall) of Syriza is a symbolic and important story to tell. The twists and turns of the bailout negotiations with the Troika, the brief reign of iconoclastic Finance Minister Yanis Varoufakis, and the worrying rise of Golden Dawn and the extreme right all converge to create a pivotal moment in Europe's recent history.

Kevin Ovenden is a longstanding journalist, writer and activist who has followed Greece's politics and social movements for 25 years. He is the author of Syriza: Inside the Labyrinth (Pluto, 2015).

Paul Mason is a writer and broadcaster on economics and social justice. He is the author of PostCapitalism (Penguin, 2015) and a contributor to Syriza (Pluto, 2015) and Student Revolt (Pluto, 2017).

'A fascinating, humane, caustic analysis of Greece and the rebirth of its left, which contains inspiration and hazard-lights for progressives everywhere'

'Highly recommended not only for understanding Greece, but for orienting ourselves in all our struggles'

'Not only captures the complexity ... but also speaks to the question of whether radical change can be mobilised on both the streets and through the ballot box'

Series Preface
Foreword by Paul Mason
Preface
1. Between Things Ended and Things Begun
2. The Resisted Rise of Syriza
3. Their Austerity and Our Resistance
4. The Monstrous Legacy of Racism
5. Lost in the Labyrinth
6. Face to Face with the Deep State
7. The Maw of the Minotaur
8. Revolt, Retreat and Rupture
Notes
About Philosophy Football