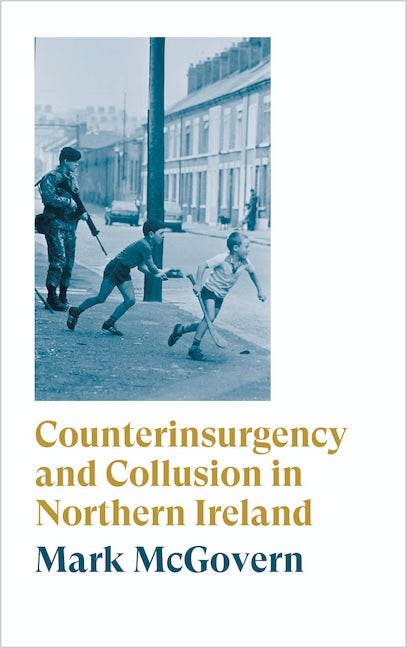 Counterinsurgency and Collusion in Northern Ireland

An analysis of UK state collusion with loyalist paramilitaries as an aspect of British military counterinsurgency during the Troubles.
Collusion by British state forces in killings perpetrated by loyalist paramilitaries was a dubious hallmark of the 'dirty war' in the north of Ireland. Now, more than twenty years since the Good Friday Agreement, the story of collusion remains one of the most enduring and contentious legacies of the conflict, a shadow that trails British counterinsurgency to this day.

Here Mark McGovern turns back the clock to the late 1980s and early '90s - the 'endgame' of the Troubles, and a period defined by a rash of state-sanctioned paramilitary killings. Drawing on previously unpublished evidence, and original testimony from victims' families and eyewitnesses, he examines several dozen killings of republicans that took place in the Mid-Ulster area, and the impact on their families and communities.

Placing these accounts within a wider critical analysis of the nature of British counterinsurgency and the state use of agents and informers, McGovern paints a damning picture of covert, deniable and unlawful violence.

Mark McGovern is Professor in Sociology at Edge Hill University, UK. In his research he has worked closely with NGOs, victms' groups and lawyers over many years on issues of conflict transformation and state violence, particularly in Northern Ireland. His publications include Ardoyne: The Untold Truth and articles for Race and Class, Sociology, State Crime and Critical Studies on Terrorism.

'If this is a harrowing book to read, one can only imagine how difficult it was to write. On each page, our respect for the author, and the families battling on against all the odds, intensifies' - Liz Fekete, Director, Institute of Race Relations 'Essential reading for those interested in counter-terrorism, counterinsurgency and the management of internal conflict around the globe ... challenging, controversial and meticulous' - Fionnuala Ni Aolain, Regent Professor, University of Minnesota Law School and Professor of Law, The Queens University Law School 'McGovern narrates a nerve-jangling roll-call of evidence of collusion and extra-judicial killings that demands a reckoning, not just with those who hunted democracy down across the countryside and streets of Northern Ireland, but more importantly with the well-mannered officials who skulked in the shadows, contriving atrocity' - Eamonn McCann, author of 'War and an Irish Town' 'An outstanding book by a fine scholar. Engaged research at its best' - John Newsinger, author of 'British Counterinsurgency'

Acknowledgements
List of Abbreviations
Introduction: What is Collusion?
Collusion and Mid-Ulster
What is Collusion?
Loyalism, Counterinsurgency and Collusion
1. British Counterinsurgency and the Roots of Collusion
Collusion and British Counterinsurgency
What is Counterinsurgency?
Small Wars and Imperial Policing
The Rule of Law and ‘Counter-Gangs’
2. Northern Ireland and the Roots of Collusion
McGurk’s Bar and the MRF
Revolution, ‘Reprisal’ and Partition
Policing the State
Collusion, Bombings and Sectarian Killings
Eliminating Enemies
3. An Intelligence War
Phases of Counterinsurgency
Counterinsurgency, Informers and Policing
Handling Informers, Changing the Rules
Intelligence ‘Leaks’
The FRU and Brian Nelson
Agents, Informers and a Void of Law
Informers, Collusion and Deniability
Covering Up Collusion
The Liberal Ideology of Collusion
4. Arming Loyalism
Providing Weapons
Arms, Ulster Resistance and the Mid-Ulster UVF
Seizures, Police ‘Failures’ and Loyalism Rearmed
5. Shooting to Kill: Targeting Republican Combatants
War and Mid-Ulster
‘Set-Piece’ Operations and Shooting to Kill
‘Set-Piece’ Shoot-to-Kill and Mid-Ulster
Collusion and the Case of Gerard Casey
Shootings at the Battery Bar
Killings in Cappagh
6. Stopping Sinn Fein: Collusion as Political Force
Targeting Sinn Fein
Endgame Politics
Local, Personal and Political
Targeting John Davey
The Killing of Bernard O’Hagan
The Shootings of Tommy Casey and Sean Anderson
The Killing of Patrick Shanaghan
The Killings of Tommy Donaghy and Malachy Carey
The Shooting of Danny Cassidy
Collusion and the Case of Eddie Fullerton
7. Instilling Fear: Targeting Republican Families and Communities
‘See No Evil’ and ‘Breakfast Table’ Collusion
Wars of Attrition
The Shooting of Phelim McNally
The Killing of Frank Hughes
Killings in the Moy
The Killing of Charlie and Teresa Fox
The Castlerock Massacre
The Killing of Roseann Mallon
Conclusion: Collusion, Truth and Justice
Dealing With the Past
Investigating Collusion
Postscript: What Proves Collusion?
Notes
Further Reading
Index