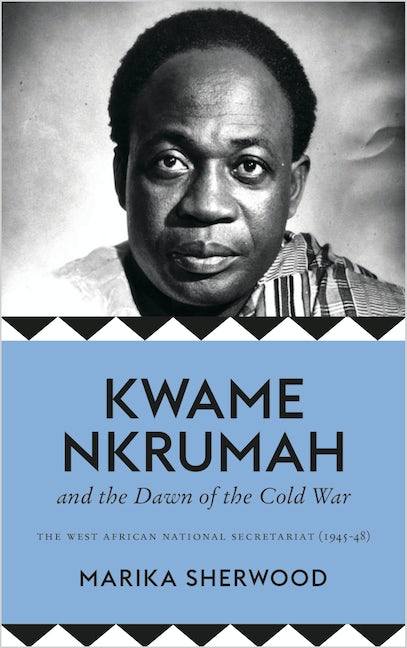 The history of a Pan-Africanist movement based in Britain and its role in the Cold War in Africa.
The West African National Secretariat (WANS) has almost been forgotten by history. A pan-Africanist movement founded in 1945 by Kwame Nkrumah and colleagues in London and France, WANS campaigned for independence and unity. Nkrumah returned to the Gold Coast in late 1947. The colonial government accused him of being a communist and fomenting the riots of early 1948. He was jailed. This led to the beginning of the Cold War in West Africa.

Drawing on archival research including the newly released MI5 files, Marika Sherwood reports on the work of WANS, on the plans for a unity conference in October 1948 in Lagos, and on Nkrumah's return home. Sherwood demonstrates that colonial powers colluded with each other and the US in order to control the burgeoning struggles for independence. By labelling African nationalists as 'communists' in their efforts to contain decolonisation, the Western powers introduced the Cold War to the continent.

Marika Sherwood is a Senior Research Fellow at the Institute of Commonwealth Studies, London. She has published many books, including Kwame Nkrumah and the Dawn of the Cold War (Pluto, 2019) and Kwame Nkrumah: The Years Abroad (Freedom Publications, 1996). Her most recent book is World War II: Colonies and Colonials (The Savannah Press, 2013). She has published innumerable articles in academic journals, Pambazuka News, and the Runnymede Trust.

'An insightful study of politics, policies and personalities ... an important contribution to the literature on decolonisation in British West Africa' - Ayodeji Olukoju, University of Lagos 'The culmination of many years of research, this book provides a fascinating introduction to the dawning of the Cold War in Africa. Simply told, readable and with a wealth of information, this work is invaluable' - Hakim Adi, University of Chichester 'This book exposes the Cold War mechanisms of 20th century imperialist agencies and illuminates their calculated methods to sabotage the launch of the first Pan-African liberated nation, Ghana, during the era of Kwame Nkrumah. Pan-African strategists need to read this' - Daryl Zizwe Poe, Lincoln University 'There have been numerous publications about the cold war and Africa, and about anti-colonial movements in Africa; but none has dealt with such analytical rigour the interconnections between those two global events and the political activities of Kwame Nkrumah. This book fills that vacuum' - Kwame Ninsin, University of Ghana 'The initial political work of the great "independista", Kwame Nkrumah, has been meticulously dissected in this book. Essential reading for anyone interested in Nkrumah before 1950 and his indefatigable fight for West African unity, a passion that consumed him long before his African unity project' - Baffour Ankomah, former editor of New African Magazine