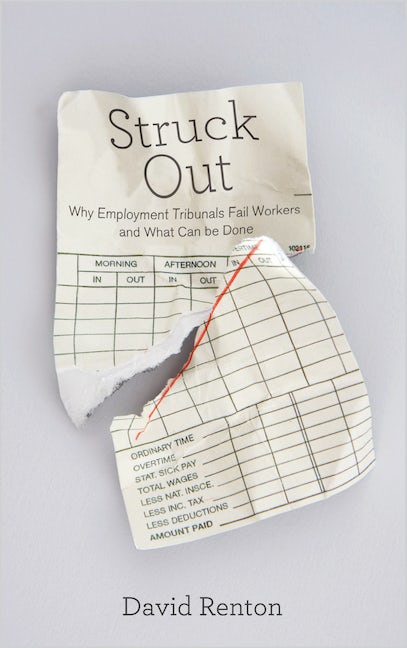 Why Employment Tribunals Fail Workers and What Can be Done

Why we can't rely on the employment tribunal system to protect workers' rights.
Every year, over a hundred thousand workers bring claims to an Employment Tribunal. The settling of disputes between employers and unions has been exchanged by many for individual litigation.

In Struck Out, barrister David Renton gives a practical and critical guide to the system. In doing so he punctures a number of media myths about the Tribunals. Far from bringing flimsy cases, two-thirds of claimants succeed at the hearing. And rather than paying lottery-size jackpots, average awards are just a few thousand pounds – scant consolation for a loss of employment and often serious psychological suffering. The book includes a critique of the present government’s proposals to reform the Tribunal system.

Employment Tribunals are often seen by workers as the last line of defence against unfairness in the workplace. Struck Out shows why we can't rely on the current system to deliver fairness and why big changes are needed.

'Essential reading for its empirically grounded and dispassionate analysis of what has gone wrong and how it might be put right' - Simon Deakin, Professor of Law at the University of Cambridge 'With this excellent step-by-step explanation of how the system works in reality, David Renton explains why it so rarely does. Blacklisted workers have experienced the process firsthand and know this book is true' - Dave Smith, Blacklist Support Group 'Approachable and readable. It opens up employment law to students and employees alike' - Linda Clarke, Professor of European Industrial Relations, University of Westminster
Preface
1. The Tribunal Obstacle Race
2. How the Tribunal System was Established
3. Agency Workers
4. Equal Pay
5. Why do so few Race Cases Win?
6. Human Rights Decisions in the Tribunal
7. Unions and the Law
8. The Common Law
9. Employment Tribunals in Crisis?
Notes
Index
Published by Pluto Press in Mar 2012
eBook ISBN: 9781849646567