by Enzo Traverso
BUY THE BOOK

In this essay, author of The End of Jewish Modernity and prolific historian of the twentieth-century, Enzo Traverso examines the parallels between two strains of modern xenophobia: anti-Semitism and Islamophobia. Looking at politics, the media and cultural output, Traverso reveals significant similarities between today’s Islamophobia and the older anti-Semitism.

A new wave of Islamophobia is spreading in the West. President Donald Trump vowed during the election to expel all Muslims from the United States and  across the European Union, conservative currents claim laws against Islam. Islam is perceived as a barbarism and a threat to Western, “Jewish-Christian” civilization, a tendency gaining strength in France following a succession of terrorist attacks  In this culture of extreme xenophobia and prejudice, the notion that Muslim citizens be compelled to wear a yellow star and crescent on their clothes, like Jews during the Second World War, no longer seems beyond the realms of possibility. 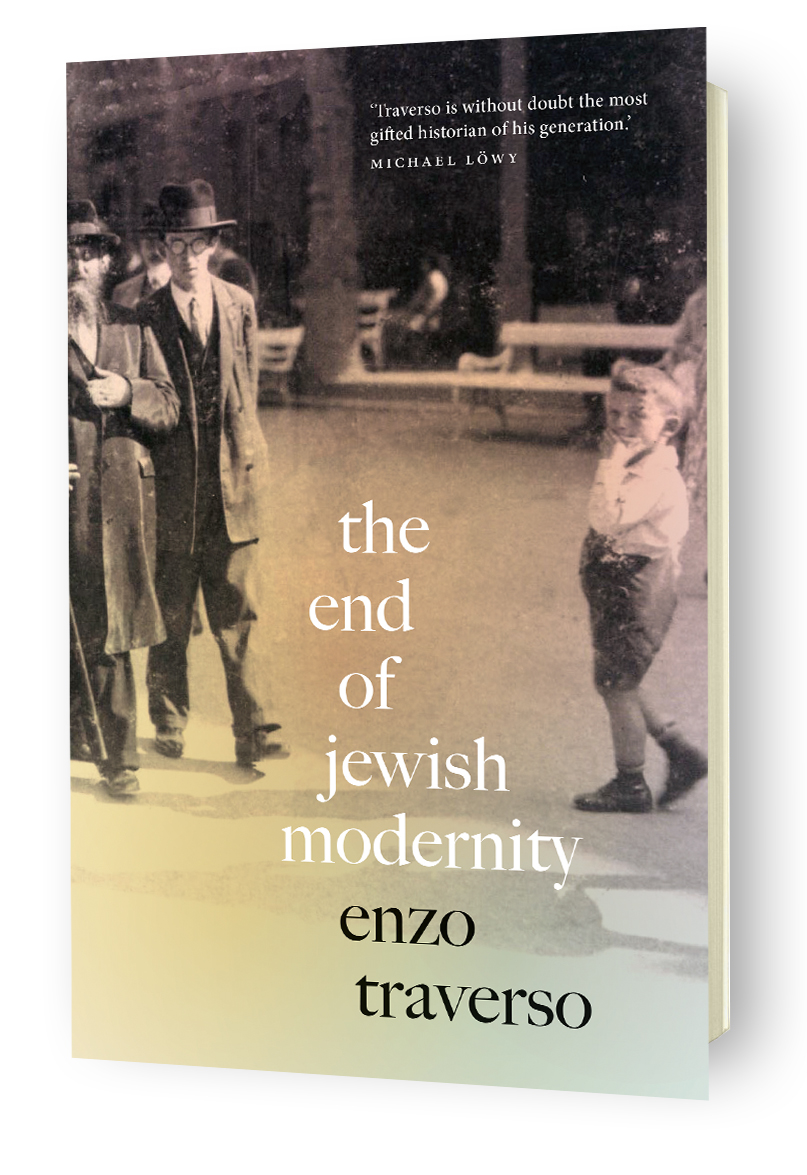 In the first half of the twentieth century, anti-Semitism was widespread almost everywhere, from the aristocratic and bourgeois layers—where it established symbolic boundaries—to the intelligentsia: many of the most important writers of the 1930s did not hide their hatred of the Jews. Today, racism has changed its forms and its targets: the Muslim immigrant has replaced the Jew. Racialism—a scientific discourse based on biological theories—has given way for a cultural prejudice that emphasises a radical anthropological discrepancy between ‘Jewish-Christian’ Europe and Islam. Traditional anti-Semitism, which for a century shaped all European nationalisms, has become a residual phenomenon. By a sort of reversal, the commemorations of the Holocaust have built a sort of ‘civil religion’ in the European Union. As in a system of communicating vessels, prewar anti-Semitism has declined and Islamophobia has increased. The post-fascist representation of the enemy reproduces the old racial paradigm and, like the former Jewish Bolshevik, the Islamic terrorist is often depicted with physical traits stressing his otherness.

The intellectual ambitions of post-fascism, nevertheless, have significantly diminished. We see no equivalent of Jewish France by Edouard Drumont or The Foundations of the Nineteenth Century by Houston Stewart Chamberlain in our present moment, nor the essays on racial anthropology by Hans Günther or André Siegfried. The new xenophobia has not produced writers like Léon Bloy, Louis Ferdinand Céline and Pierre Drieu La Rochelle, not to speak of philosophers like Martin Heidegger and Carl Schmitt. The cultural humus of post-fascism is not nourished with noteworthy literary creation—its most significant expression is a recent novel by Michel Houellebecq, Submission, which depicts France in 2022 transformed into an Islamic Republic, rather with a massive campaign to win media attention. Many political and intellectual personalities, television channels and popular magazines that certainly could not be qualified as fascist, have contributed immensely to the building of this cultural humus. We could remember the famous declaration of Jacques Chirac—pronounced in 1991—on the ‘noise and smell’ of the buildings inhabited by Maghreb immigrants; the enflamed prose of Oriana Fallaci of the Muslims who ‘reproduce themselves like rats’ and urinate against the walls of our cathedrals; the comparison of Black ministries to monkeys both in France and in Italy; and innumerable despising references to Islam as ‘the most stupid religion’ (la religion la plus con). George L. Mosse had pointed out that, in classical fascism, spoken words were more important than written texts. In an age in which the ‘videosphere’ has replaced the ‘graphosphere’, it is not astonishing that the post-fascist discourse spreads first of all throughout the media, assigning a secondary place to intellectual productions (which become useful—like Submission—insofar as they are transformed into media events).

It seems to me that the most significant similarities between today’s Islamophobia and the older anti-Semitism evoke the German Reich of the end of the nineteenth century, rather than the French Third Republic. Since the Dreyfus Affaire, the French anti-Semitism stigmatised Jewish immigrants from Poland and Russia, but its main target were the senior officials (juifs d’Etat) who, under the Third Republic, occupied very important positions in the bureaucracy, the army, the academic institutions and the government. Captain Dreyfus himself was a symbol of such a social ascension. At the time of the Popular Front, the target of anti-Semitism was Léon Blum, a Jewish and homosexual dandy who embodied the image of a republic conquered by the ‘Anti-France’. The Jews were designated as ‘a state within a state’, a position that certainly does not correspond to the present situation of the African and Arab Muslim minorities who still remain hugely underrepresented inside the state institutions of European countries. Thus, the comparison with Wilhelmine Germany would be more pertinent, wherein the Jews were carefully excluded from the state machine, whilst the newspapers warned against a ‘Jewish invasion’ (Verjudung) that put into question the ethnic and religious matrix of the Reich. In this instance, Anti-Semitism played the role of a ‘cultural code’ that allowed Germans to negatively define a national consciousness, in a country troubled by rapid modernisation and the Jewish concentration in the big cities, where they appeared as its most dynamic group. In other words, a German was first of all a non-Jew. In a similar way, today Islam is becoming a cultural code that allows one to find, by a negative demarcation, a lost ‘French identity’, threatened or engulfed in the process of globalisation. The fear of multiculturalism and hybridity (métissage) simply updates the old anxiety about the ‘mixture of blood’ (Blutvermischung). Today, the language has changed, but the prose of Alain Finkielkraut, who expresses his ‘unhappy identity’ (identité malheureuse) in front of two calamities such as multiculturalism and a mistakenly idealised hybridity (the métissage of a France “Black-Blanc-Beur”), does not differ very much from that of Heinrich von Treitschke. In 1880, this great historian deplored the ‘intrusion’ (Einbruch) of the Jews into German society writing that they upset the customs of Kultur and acted as a corrupting force. Von Treitschke’s despairing conclusion became a kind of slogan: ‘the Jews are our unhappiness’ (die Juden sind unser Unglück).

Although much of the transition from the old anti-Semitisim to the present Islamophobia is played out in France’s media, it does find it expression in a literary figure: Renaud Camus, a writer who does not hide his connections with the National Front. Fifteen years ago, Camus complained in his journal about the overwhelming Jewish presence in the French cultural media; in the following years, however, he has shifted his focus to the Muslims, whose mass immigration has produced a “great replacement,” in other words the “Islamisation” of France. Belonging to a younger generation, Michel Houellebecq, who wishes to become the Céline of the beginning of the twenty-first century, also assumed the ‘great replacement’ as the starting point of Submission. And the same idea is the core of a successful essay—500,000 copies sold in six months—by Eric Zemmour, Le suicide français, devoted to the French decline from 1970 to 2008. More recently, the idea of the ‘great replacement’ was defended in some of the editorials of Le Figaro. This is the mode in which post-fascism is building its cultural hegemony, far beyond its electoral exploits.

However, Islamophobia is not a simple ersatz for the old anti-Semitism, its roots are old and it possesses its own tradition: colonialism. The roots of Islamophobia lie in the memory of the long colonial past of Europe and, in France, of the Algerian War. Colonialism formed a political anthropology based on the dichotomy between citizens and colonial subjects—citoyens and indigènes—that fixed social, spatial, racial and political boundaries. Whilst this juridical cleavage codified under the Third Republic was broken, the Muslim immigrants who have become French citizens continue to face a xenophobic reaction, formed by this political anthropology, that perceives them as an infectious agent, as a ‘people within the people’. The colonial matrix of Islamophobia explains its virulence and persistence.One way to examine the material reality of these spatial, racial and political boundaries is through the natural dissolution of the names of Italian, Polish and Spanish migrants into French patronymics, a process that often occurs after three generations. This dissolution contrasts with the persistence of African and Arabic first and family names, which immediately reveal their holders as belonging to a special, second-rank category; ‘coming from immigration’ or issu de l’immigration.

The colonial matrix of Islamophobia gives us a key for understanding the ideological metamorphoses of post-fascism (many far-right movements like the Front National in France, Lega Nord in Italy, Pegida in Germany and other similar currents in other countries of the EU), which has abandoned the imperial and conquering ambitions of classical fascism in order to adopt a much more conservative and defensive posture. It does not wish to conquer, rather to expel (even criticising the neo-imperial wars carried out since the beginning of the 1990s by the US and their Western allies). While nineteenth-century colonialism wished to accomplish its ‘civilizing mission’ through its conquests outside of Europe, postcolonial Islamophobia fights against an interior enemy in the name of the same values. Rejection has replaced conquest, but the motivations did not change: in the past, conquest aimed to subjugate and civilize the barbarians; today, rejection and expulsion aim to protect the nation from their deleterious influence. This explains the recurring debates on secularism and the Islamic veil leading to the Islamophobic law, promulgated in France ten years ago, which prohibits it in public places. This consensual agreement on a neocolonial and discriminatory conception of secularism has significantly contributed to legitimize post-fascism.

This Islamophobic wave, with its bellicose rhetoric—‘we are in war against terrorism’—positions Islam as the only legitimised enemy of the Western order, which ultimately nourishes terrorism.. The combatants against “Islamic fascism” and defenders of ‘human values’  also achieved a crucial result: rendering the victims of the Western wars in Iraq, Libya and Syria—largely superior in number than the victims of Islamic terrorism in Europe—are largely forgotten.

Enzo Traverso is Susan and Barton Winokur Professor in the Humanities at Cornell University. His publications include more than ten authored and edited books, including Fire and Blood, The European Civil War 1914-1945 (Verso, 2016) and Understanding the Nazi Genocide: Marxism after Auschwitz (Pluto Press, 1999).

The End of Jewish Modernity by Enzo Traverso is available from Pluto Press.