May Day in Berlin:
Six highlights from 133 years of workers’ history

by Nathaniel Flakin
BUY THE BOOK

This Sunday is May Day! This is the 133rd time that the International Day of Workers’ Struggle will be celebrated in the German capital. The proletarian holiday has continued through world wars, revolutions, fascism, Stalinism, and late capitalism. Nathaniel Flakin, author of the new book Revolutionary Berlin: A Walking Guide explores this tumultuous history.

May Day was first proclaimed by the Socialist International at its founding congress in 1889. The following year, celebrations took place around the world. In Berlin, the Social Democratic Party held an indoor rally at the Neue Welt, in Neukölln’s Hasenheide, with SPD chairman August Bebel as the keynote speaker. The event had to be inside, as demonstrations were prohibited in Wilhemine Germany. Every year on May 1, workers would hang red flags on smokestacks and church towers — the higher up they were, the longer it would take to get them down.

Berlin’s May Day tradition was interrupted by the First World War and the state of siege. But in 1916, in the days before May 1, tiny slips of paper appeared all over the city: “Whoever is against the war will appear on May 1 at eight in the evening. Potsdamer Platz (Berlin). Bread! Freedom! Peace!”

A few thousand workers heeded the anonymous call. From the middle of the crowd, a 45-year-old man in a gray soldier’s uniform lifted himself up. He had glasses, thinning hair, and a mustache. “Down with the war!” he cried out. “Down with the government!”

This was Karl Liebknecht, a member of the Reichstag who had been drafted into the army. He was soon put on trial for high treason. On the day his trial began, 50,000 metalworkers went on strike demanding “Freedom for Liebknecht!” This was the first mass action against the war — a prelude to the revolution of 1918.

A stone pedestal in front of Potsdamer Platz 10 marks the spot where Liebknecht’s cry rang out. The East German government had planned to add a statue, but then the wall was built right next to the plinth. Now we have an unintentionally postmodern non-monument to Liebknecht.

By 1929, Berlin’s May Day had been going on for almost four decades. With political violence on the rise, the police chief Karl Zörgiebel, a social democrat, prohibited all public gatherings. In the red districts like Wedding and Neukölln, this was an unheard-of provocation. Tens of thousands of proletarians defied the ban.

Over the course of the next two days, police shot at least 11,000 rounds of ammunition. During the Blutmai (Bloody May Day), between 32 and 38 civilians were killed. A number of victims had not even been on the streets — they were shot in their homes.

The police claimed that the reds had fired first. The number of injured police? Zero. Eventually one police officer with a bullet wound was presented. But the press soon discovered that he had shot himself with his own gun days before May 1. While the police blamed the Communist Party for organizing a riot, only a tenth of the 1,200 people arrested that day were KPD members.

No one — neither police officers nor politicians — was ever charged with a crime. There was no parliamentary, criminal, or civil investigation. The closest we have gotten to an official reckoning is the first season of the TV show Babylon Berlin, which was partially sponsored by German public TV, showing a very accurate rendition of the police massacre.

Adolf Hitler was named Reich Chancellor on January 30, 1933. In coalition with other right-wing parties, the Nazis immediately began to establish their dictatorship. Instead of trying to ban the workers’ May Day tradition, which had proven impossible for the Kaiser, the Nazis set out to co-opt it.

So May 1 was made a public holiday: the “Day of National Labor.” In the morning, hundreds of thousands of young people joined a youth rally in the Lustgarten. The 85-year-old Reich President Paul von Hindenburg (who had put Hitler in power) called for “manly discipline and a spirit of sacrifice.”

In the evening, more than a million people gathered at Tempelhofer Feld, which back then was a parade ground with a small airport. There were spotlights illuminating the giant Swastika banners behind the tribune. In the evening, Hitler proclaimed the end of the class struggle and the beginning of Germany’s Volksgemeinschaft (national community).

The bureaucrats in charge of Germany’s trade unions desperately wanted to accommodate themselves to the new regime and supported the new holiday. But this didn’t save them: the following day, Nazi stormtroopers occupied all the union headquarters and arrested their leaders. The Nazis had not been too successful in recruiting workers, so they smashed all workers’ organisations.

In 1968, young people around the world were radicalizing, and West Berlin was no exception. The new left in Germany was called the Extra-Parliamentary Opposition or APO. On April 11, 1968, one of the main leaders of the student movement, Rudi Dutschke, had been shot by a right-wing terrorist.

The APO decided to organize their own independent demonstration on May Day. This was the first time since the founding of the Federal Republic of Germany that the left would demonstrate separately from the German Trade Union Confederation (DGB). Times were a’changing, but official union leaders strongly supported the U.S. war in Vietnam. The APO wanted to take their anti-imperialist message (“Amis out of Vietnam!”) to a workers’ district, and called for a demonstration at Karl-Marx-Platz.

No one knew if anyone would show up — such a thing had never been attempted before. On May 1, the tiny square was overflowing with 30,000 people — just as many as at the union demonstration. Old communist workers hung old red flags out of their windows. A gathering like this hadn’t taken place since 1932, a whole generation earlier. Since 1968, there have been alternative left-wing demonstrations every year on May 1 — but they didn’t really catch on until 20 years later.

On the afternoon of May 1, 1987, an internationalist street festival took place at Lausitzer Platz in Kreuzberg. Around the edges of the festival, there might have been a bit of shouting or shoving with cops — but nothing out of the ordinary for Kreuzberg in the 1980s. No one understood why the police attacked in force. At 7:30 p.m., they advanced onto the square with batons, water cannons, and tear gas. One teacher who was living on Lausitzer Platz in 1987 reported there was so much tear gas that they couldn’t return to their apartment for three days! 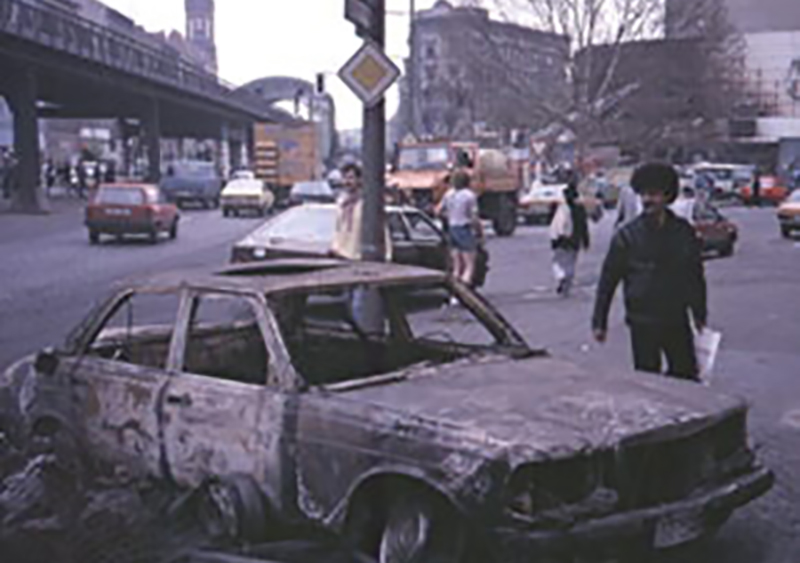 But people fought back. And as the police withdrew, autonomists began breaking windows and plundering the surrounding shops. Again, nothing unusual for Kreuzberg. But this time, it wasn’t just the usual suspects: More and more working-class families used the opportunity for “proletarian shopping.” Everyone from small children to senior citizens joined in, and it became a real Kiezaufstand (Neighborhood Uprising).

By 10 p.m., the police were forced to retreat from the entire kiez — as telephone poles were knocked over and the neighbourhood became pitch black, the “autonomous republic of Kreuzberg” was proclaimed. Cars were flipped over and lit ablaze to create barricades. The police only reentered around 2 a.m. It wasn’t so much the cops that won the day — by the early hours of the morning, all the alcohol requisitioned from shops had made it impossible to hold the barricades.

This uprising made such an impression that the following year, a Revolutionary May Day demonstration was organised in Kreuzberg. That has taken place every year for 34 years now (with a semi-interruption for the pandemic). This year, the demonstration is going from Hertzbergplatz in Neukölln to Oranienplatz in Kreuzberg — right where the demonstration started back in 1988.

Police face up to protestors on Karl-Marx-Allee. Photo: Imago/Marius Schwarz

May Day shows no signs of stopping. As Rosa Luxemburg wrote way back in 1894: “As long as the struggle of the workers against the bourgeoisie and the ruling class continues, as long as all demands are not met, May Day will be the yearly expression of these demands. And, when better days dawn, when the working class of the world has won its deliverance then too humanity will probably celebrate May Day in honour of the bitter struggles and the many sufferings of the past.”

Nathaniel Flakin is a freelance journalist and historian based in Berlin. He is the author of Martin Monath: A Jewish Resistance Fighter Among Nazi Soldiers and Revolutionary Berlin: A Walking Guide, which is is out now.

This article was first published in Exberliner, 29th April 2022. 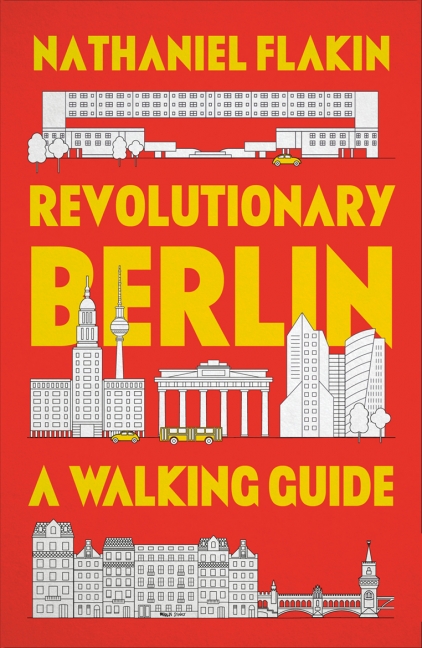