by Robert Chernomas and Ian Hudson

Trump’s declaration of an economy ‘for the people’ lead many to incautiously declare the end of neoliberalism. Such declarations were at variance with subsequent news of his plans for market deregulation, corporate tax cuts and his instating of the richest cabinet in U.S. history. Why do tired neoliberal economic policies, proven to be an abject failure, dominate the economic landscape?  In their new book, The Profit Doctrine, Robert Chernomas and Ian Hudson set to found out, critically examining the key proponents of neoliberalism; their flawed ideas and their flawed characters. In this exclusive essay, the authors look at America’s romance with Milton Friedman, Alan Greenspan and Robert Lucas and their theories and look to the future.

In Donald Trump’s inauguration speech he boasted that his administration would take power from Washington and give it back to “you, the people.” As usual, President Trump’s headline is appealing but his analysis is appalling. While he is correct that economic policy in the US has turned against most of “the people,” it is not Washington that is the problem, at least not in the manner that Trump or his cabinet of business executives would have you believe.

In fact, contrary to what President Trump suggests, economic policy since 1980 has worked against most people in the US because of its dedication to corporate profits and the wealth of the business class. An economy that actually worked for the people would create stable growth, price stability, full employment, and the efficient allocation of resources. Some might even add to this list an environmentally sustainable economy and a reasonably equitable distribution of wealth and income. However, with the exception of price stability, the US after 1980 has delivered none of these things.

According to inequality experts, Thomas Piketty and Emmanuel Saez, between 1973 and 2000 the average income of the bottom 90% of US taxpayers fell by 7%. Incomes of the top 1% rose by 148%, the top .1 percent by 343%, and extremely well off in the top .01% rose by an amazing 599%. Economic Policy Institute economist Lawrence Mishel calculated that in 1965, the average pay of the CEOs at the top 350 US firms (ranked by sales) stood at about 20 times the average compensation of their workers. By 2011, CEO income was over 200 times that of their average worker.

An economy that turned against the people was a predictable result of the policies that came to dominate the economic environment after 1980. Starting in the late 1970s the US business organised a strong and coherent political operation that successfully reversed the constraints that governments had placed on firms’ ability to make profits. Policies that protected unions, the environment, and worker safety were repealed under business pressure. The tax rate on corporate profits and upper income earnings was reduced. How could ideas and policies that proved to be such an abject failure for the people come to dominate the economic landscape?

Keynes famously wrote: “Madmen in authority, who hear voices in the air, are distilling their frenzy from some academic scribbler of a few years back. I am sure that the power of vested interests is vastly exaggerated compared with the gradual encroachment of ideas … soon or late, it is ideas, not vested interests, which are dangerous for good or evil.” (1936, p. 383)

We think this is the wrong way of looking at how ideas become economic policy. Surely, some “academic scribbler” influencing “Madmen in authority” is not an acceptable explanation. Keynes mystified the origin of these ideas and, more importantly, trivialised the means by which they rise to the top. Why do some ideas become accepted, institutionalised and popularised while others are ignored? In our book, The Profit Doctrine, we argue that economic knowledge is not a Darwinian process where superior ideas overcome their inferior predecessors. Rather, the ideas that dominated the discipline and were implemented as policy after 1980 were more a result of the imperatives of the economic environment of the time, and the institutional clout mustered by those who benefit from economic policy, than a battle of academic ideas taking place in a context-free vacuum of abstract intellectual debate.

Marx’s reflection on an earlier era is a better place to begin if one is looking for a conceptual framework to understand how ideas take hold in society. Marx argued that once the economic system of capitalism became dominant in the nineteenth century, economic debate was, “no longer a question, [of] whether this theorem or that was true, but whether it was useful to capital or harmful, expedient or inexpedient, politically dangerous or not. In place of disinterested inquirers, there were hired prize fighters”.

This is not to suggest that Marx’s “prize fighters” of intellectual ideas are being dishonest with themselves or the public. Rather, their ideas, in which they no doubt genuinely believe, are promoted, popularised and enacted into policy by those who stand to benefit from them. Unlike Keynes, who insists that the contest for intellectual dominance is a contest of ideas; Marx argues that it is a contest of power. Economic ideas, and the policies that arise from them, have profoundly different impacts on different groups in society. It is, therefore, in any group’s interest to promote those ideas from which it will benefit, while discrediting those that are harmful. The question then becomes, what is the capacity for different groups to promote certain ideas and dismiss others? This depends, most obviously, on the financial, political and institutional resources that they can bring to bear but also on their coherence as a group and their ability to act in concert.

After 1980, business in the US did all of these things remarkably effectively. Public opinion was influenced through sympathetic pieces in the media. Think tanks were funded to conduct research. Political donations bought votes and policy. The economics profession played a crucial role in this process, creating and justifying pro business policy. It is this role that we trace in The Profit Doctrine.

Perhaps the most famous of the pro business economists, Milton Friedman, once wrote 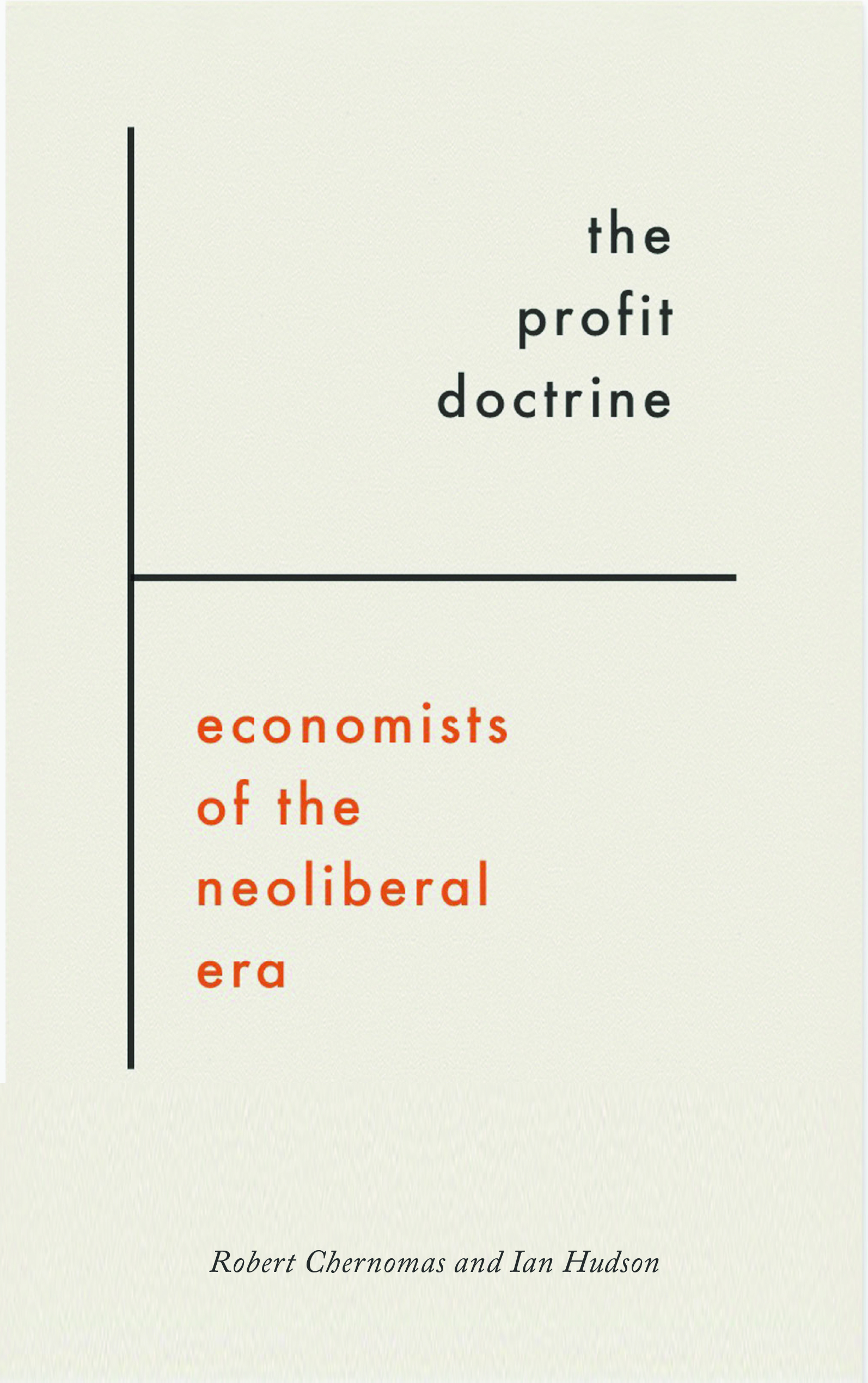 “there is one and only one social responsibility of business–to use it resources and engage in activities designed to increase its profits”. Unsurprisingly, Friedman’s economic ideas championed policies that would reduce what he considered to be the burden of the state. Friedman’s ideas were pursued by subsequent economists on several fronts. Real Business Cycle economists argued against using macro policy to pursue full employment and avoid recessions. Public Choice economists pilloried government regulation as unnecessary, ineffective and inefficient. Financial economists developed theories suggesting that financial markets were efficient and, therefore, did not require government oversight. In government, these policies were implemented by economists in positions of power, like Lawrence Summers and Alan Greenspan. What all of these economists have in common is that their ideas greatly favoured the interests of business at the expense of the majority of Americans.

Trump may be shaking things up in terms of over the top bombast, but in terms of economic policy, his deregulatory, anti-labour, and corporate tax cut policies very much continue the policies that business has pressured Washington into implementing since 1980.

Robert Chernomas is Professor of Economics at the University of Manitoba, Canada. He is co-author (with Ian Hudson) of Economics in the Twenty-first Century: A Critical Perspective (University of Toronto Press, 2016) and To Live and Die in America: Class, Class, Power Health and Health Care (Pluto Press, 2013).

Ian Hudson is Associate Professor of Economics at the University of Manitoba, Canada. He is the co-author (with Robert Chernomas) of Economics in the Twenty-first Century: A Critical Perspective (University of Toronto Press, 2016) and To Live and Die in America: Class, Class, Power Health and Health Care (Pluto Press, 2013).

The Profit Doctrine: Economists of the Neoliberal Era by Robert Chernomas and Ian Hudson is available from Pluto Press.