This lecture by William Mitchell co-author with Thomas Fazi of the influential book, Reclaiming the State: A Progressive Vision of Sovereignty for a Post- Neoliberal World will be chaired by Terrence McDonough Professor Emeritus of Economics UCG.

In the minds of many Irish people Brexit is viewed as a right-wing project because the principal authors are backwoodsmen of the British Tory Party. Bill Mitchell, an Australian economics professor, disagrees and he will be setting out his stall in layman’s terms at a public meeting entitled “Reclaiming the State”.

It is organised by The Desmond Greaves School and will take place on Wednesday 3rd October in Galway’s Harbour hotel at 8pm. Chairing the event will be Terry McDonough, Professor Emeritus of Economics NUIG, who is well-known right across Galway’s community sector as well as the city’s progressive circles.

With regards to Brexit, Bill Mitchell argues that progressives and the political Left should not regard Brexit – and the current problems of the EU and monetary union generally – as a cause for despair but rather as a unique opportunity to embrace once again a progressive, liberating vision of national independence, to reject the EU’s austerity straitjacket and to implement a democratic socialist platform, which is impossible within the EU, let alone the Euro-zone.

Bill Mitchell and Italian political theorist Thomas Fazi have co-authored a new book “Reclaiming the State – A Progressive Vision of Sovereignty in a Post-Neoliberal World”.

In this important workbook, they issue a highly topical challenge to progressives, those on the Left and genuine liberals to come to the defence of national sovereignty and not cede that issue to the populist Right.

They dispute key EU propositions that national independence has become irrelevant in today’s increasingly complex and globalised world. And contend that it is only by reclaiming the state from supranational institutions, such as the European Union, that we can break away from the neo-liberal economic dogma of the privatisation of resources and public services, deregulation of finance, the reduction of workers’ rights in collective bargaining, cuts to social programmes and the lowering of taxes on wealth and capital at the expense of the middle and working classes.

However, Bill Mitchell recognises that a compelling socio-economic economic programme is not enough to enable progressives win the hearts and minds of the people. If the political Left is to become relevant in the form of successful mass political parties again it needs to make the rhetoric of nationhood its own, as Ireland’s James Connolly and countless pioneers of the classical Labour and socialist movements did in their day.

END_OF_DOCUMENT_TOKEN_TO_BE_REPLACED 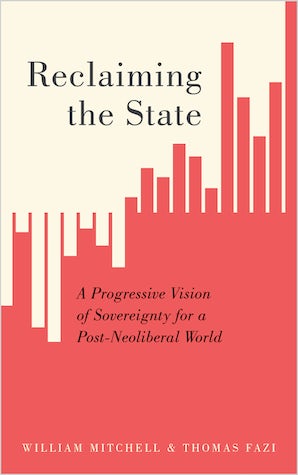 A provocative economic analysis which reconceptualises the nation state as a vehicle for progressive change.
END_OF_DOCUMENT_TOKEN_TO_BE_REPLACED
All events
X