The debate around growing inequality is raging amongst economists, and Marxists are finding new ways to map-out the modern economy. Managerial Capitalism introduces a new way of understanding the changing structure of our economy through the emergence and behaviour of a new class – managers. In the post war years as social democracy reigned, managers tended to form compromises with workers. However, under neoliberalism, allegiances have shifted. Today, a new alliance is forming between managers and capitalist owners, changing the nature of the hierarchy of power under capitalism. Additionally, the authors argue, this is happening much faster and universally than was previously thought. By applying Marx’s basic concepts to the reality of the system today, through the use of extensive data sets as well as firmly rooting the argument in its historical context, Managerial Capitalism updates Marxism for the twenty-first century, through showing how the modes of production today are shaped by a new class, that must be understood if it is to be challenged.

Gérard Duménil will be speaking and the event will be chaired by Michael Roberts.

Gerard Duménil is an economist and former Research Director at the Centre National de la Recherche Scientifique. He is a member of the editorial board of Actuel Marx. He is the co-author with Dominique Levy of Managerial Capitalism (Pluto, 2018), and The Crisis of Neoliberalism (HUP, 2014).

Michael Roberts has worked in the City of London as an economist for over 30 years. He is author of The Great Recession – a Marxist view (2009); The Long Depression (Haymarket 2016) and with G Carchedi as joint author of The World in Crisis (Haymarket, 2018 forthcoming). He has just published Marx 200: a review of Marx’s economic ideas 200 years after his birth. He blogs at thenextrecession.wordpress.com

END_OF_DOCUMENT_TOKEN_TO_BE_REPLACED 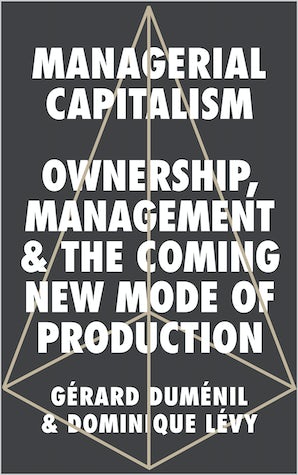 An innovative Marxist analysis of the new managerial class.
END_OF_DOCUMENT_TOKEN_TO_BE_REPLACED
All events
X