Nothing To Lose But Our Chains

Join Jane Hardy via ZOOM to hear her optimistic exploration into the power of the working class.

Since capitalism began, British workers have always fought for their rights. Today it’s no different.

Through a range of case studies, Hardy looks at how workers are challenging employers’ assaults in the neoliberal workplace, comparing these new actions to a long history of British working class struggle. She explores the historic role of migrants in the British workforce, from the Windrush generation to more recent arrivals from the EU, as well as placing womens’ collective action centre stage. Analysing the rise of robotics and artificial intelligence, she refutes claims that we are entering a post-capitalist society. In her book Jane Hardy argues that despite capitalism’s best efforts to stop us, we can always find ways to fight it.

Jane Hardy was Professor of Political Economy at the University of Hertfordshire. She is now an independent writer and researcher. Her new book, Nothing to Lose But Our Chains: Work and Resistance in Twenty-First-Century Britain is out now via Pluto Press. She has published widely on the restructuring of the Polish economy, including her book Poland’s New Capitalism. She is a member of the Editorial Board of International Socialism.

Register via Eventbrite for instructions to join ZOOM event. This is a free entry event, but if you’d like to sling October Books a donation, please do.

END_OF_DOCUMENT_TOKEN_TO_BE_REPLACED 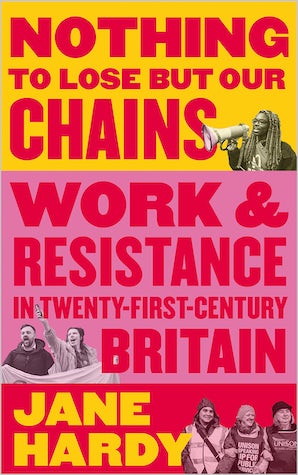 Nothing to Lose But Our Chains

Work and Resistance in Twenty-First-Century Britain

Since capitalism began, British workers have always fought for their rights. Today it's no different.