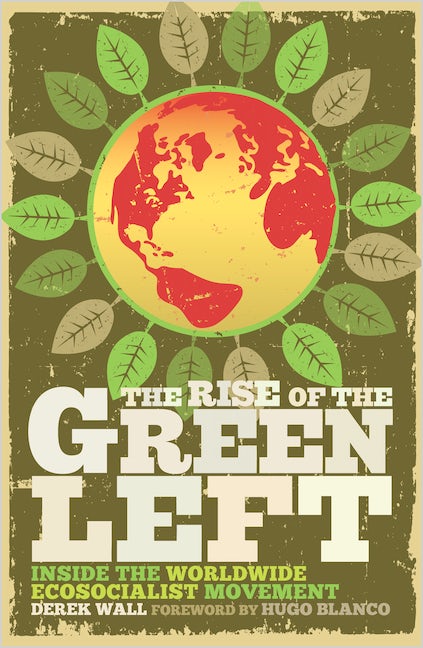 The Rise of the Green Left

Inside the Worldwide Ecosocialist Movement

A unique insider view of how ecosocialism has developed and a practical guide to focused ecosocialist action.
Climate change and other ecological ills are driving the creation of a grassroots global movement for change. From Latin America to Europe, Australia and China a militant movement merging red and green is taking shape.

Ecosocialists argue that capitalism threatens the future of humanity and the rest of nature. From indigenous protest in the Peruvian Amazon to the green transition in Cuba to the creation of red-green parties in Europe, ecosocialism is defining the future of left and green politics globally. Latin American leaders such as Morales and Chavez are increasingly calling for an ecosocialist transition.

Drawing on the work of key thinkers such as Joel Kovel and John Bellamy Foster, Derek Wall provides an unique insider view of how ecosocialism has developed and a practical guide to focused ecosocialist action. A great handbook for activists and engaged students of politics.

'For too long the official left has ignored, even attacked ecology. We should be grateful to Derek Wall. It is time to recognise that the rights of people rest on the rights of Mother Earth. And this book helps us move in that direction' - Vandana Shiva, Director of the Foundation for Science, Technology, and Ecology, New Delhi; author, activist, and winner of the Alternative Nobel Prize 'There is no one more tuned in to the great range of struggles for ecosocialism across the world and more capable of presenting them in practical and down-to-earth terms than Derek Wall' - Joel Kovel, author of The Enemy of Nature (2nd Edition, 2007) 'With our planet in the grip of a severe environmental crisis we should never tire of seeking fresh alternatives. And, with so many our environmental problems being caused and sustained by an unrelenting demand for economic growth, Derek Wall's The Rise of the Green Left sets out a new political agenda of huge significance. Highly recommended' - Caroline Lucas, MP, Leader of the Green Party 'Easily the most important book on this subject - an essential guide for anyone interested in how politics and ecology can come together to solve the most pressing issues of our times' - Salma Yaqoob, Leader of the Respect Party, UK 'Mandatory reading for social, labour, and environmental activists and every concerned person, perhaps no place more than in the politically circumscribed and insular United States. The growth of the global Green Left is hopeful news and coming just in time' - Howie Hawkins, co-founder of the Green Party in the United States and editor of Independent Politics: The Green Party Strategy Debate 'A guide to activism and a manifesto that deserves to be read by everyone who wants a better world. Wall's insightful work clearly shows what ecosocialism is, how it has grown and how it can mount a real challenge to capitalist ecocide' - Ian Angus, editor of ClimateAndCapitalism.com; author of The Global Fight for Climate Justice 'Derek Wall has done us all a great service by documenting this urgently important development in world politics' - Derrick O'Keefe, Co-Chair Canadian Peace Alliance and Contributing Editor to SocialistVoice.ca
Foreword by Hugo Blanco
1. Why Ecosocialism?
2. The real climate change swindle
3. An ecosocialist manifesto
4. The ecosocialist challenge
5. Ecosocialism in Latin America
6. Slow the train!
7. Resources for Revolution
Bibliography
Appendix 1: The Belem Ecosocialist Declaration
Appendix 2: The Headcorn Declaration from Green Left.
Index
Published by Pluto Press in Sep 2010
Paperback ISBN: 9780745330365
eBook ISBN: 9781783710614

END_OF_DOCUMENT_TOKEN_TO_BE_REPLACED
Back to Top
X