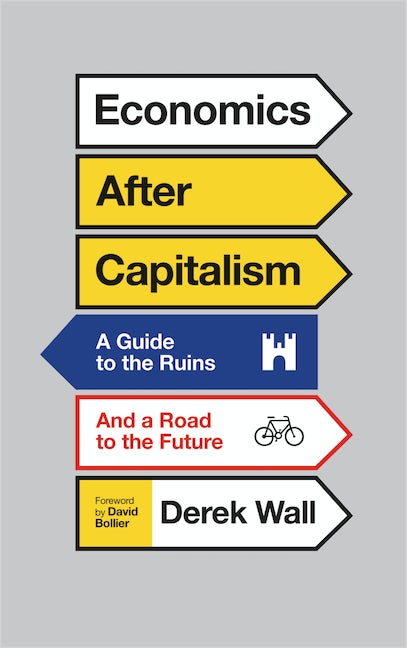 A Guide to the Ruins and a Road to the Future

'There is no alternative' has been the unofficial mantra of the neoliberal order since its utterance by Margaret Thatcher in the 1980s. However, there is an alternative to our crisis-ridden, austerity-inflicted world - and not just one alternative, but many.

Challenging the arguments for markets, mainstream economics and capitalism from Adam Smith onwards, Economics After Capitalism provides a step-by-step guide to various writers, movements and schools of thought, critical of neoliberal globalisation. These range from Keynesian-inspired reformists such as Geroge Soros and Joseph Stiglitz, critics of inequality like Thomas Piketty and Amaitya Sen, to more radical voices including Naomi Klein, Marxists such as David Harvey, anarchists, and autonomists including Toni Negri and Michael Hardt.

By providing a clear and accessible guide to the economics of anti-capitalism, Derek Wall successfully demonstrates that an open source eco-socialist alternative to rampant climate change, elite rule and financial chaos is not just necessary, but possible.

'A thoughtful and inspiring guide to capitalism and anti-capitalism. Drawing upon his experience as an economist he makes the most seemingly obscure ideas clear'

'Derek Wall is one of the world's leading advocates of a synthesis between Red and Green. In this inspiring book, he articulates democratic, just and sustainable alternatives to the dominant planet-wrecking, pro-elite economics of free market capitalism'

'Usually the green perspective is simply tagged on to the red. Derek Wall is that rare breed: a real red-green hybrid. In this book, his eco-Marxism comes alive as he guides us through the major issues and leading theorists with a lightness of touch and personal warmth which makes even the most complicated of arguments accessible'

'A crash course in critical economy. It disproves the notion that economics is boring or dense, partly because it approaches the subject in terms of human needs instead of dry statistics, and partly because of Wall's accessible writing style. Without over-simplification of ideas, he writes in a manner that laypersons can understand, throwing in a lot of examples from the real world and even touches of humour, to give hope that humans could organise their common life differently and better'

'This book is perfect for those who are beginners to economics in providing all the vital information that other books omit ...Wall has produced a user-friendly volume, free from heavy jargon, and he keeps things short and to the point'

END_OF_DOCUMENT_TOKEN_TO_BE_REPLACED
Back to Top
X