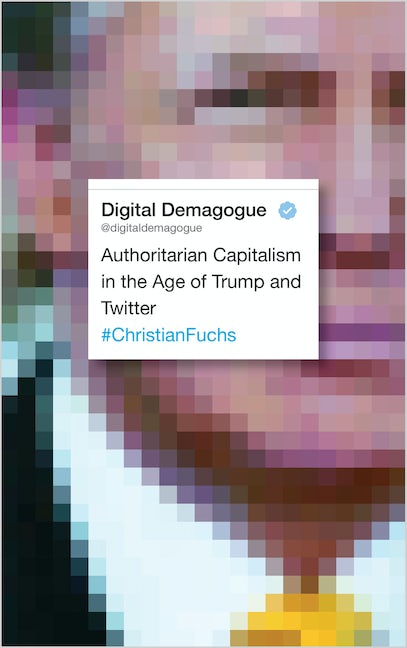 An analytical intervention into Trumpology, Twitter and authoritarianism.
From 'Covfefe' to #FraudNewsCNN and #FakeNews, Donald Trump's tweets have caused an international frenzy. He is a reality TV and Twitter-President, who uses digital and entertainment culture as an ideological weapon - as an expression of his authoritarianism.

This book delves into new political-economic structures as expressed through political communication to explain the rise of authoritarian capitalism, nationalism and right-wing ideology throughout the world. Christian Fuchs does this through updating Marxist theory and the Frankfurt School's critical theory. He re-invigorates the works on authoritarianism of Franz L. Neumann, Theodor W. Adorno, Erich Fromm, Herbert Marcuse, Max Horkheimer, Wilhelm Reich, Leo Lowenthal and Klaus Theweleit in the age of Trump and Twitter.

In the age of big data and social media, Digital Demagogue studies the expressions of ideology, nationalism and authoritarianism today and discusses prospects for overcoming capitalism and renewing the Left.

'Christian Fuchs provides a much-needed account of authoritarianism under communicative capitalism. This thorough, empirically-rich study is essential reading for anyone concerned with the intensification of far-right power in a digital age' - Jodi Dean, author of Crowds and Party (Verso, 2016) 'Trump. Modi. Erdogan. Duterte. Le Pen. Farage. The list of authoritarian rulers and their henchmen goes on and on. For an excellent guide to understanding Trump and the dangerous worldwide movement he leads, you need go no further than this conceptually rich and empirically detailed book' - Vincent Mosco, author of Becoming Digital: Toward a Post-Internet Society (Emerald Publishing, 2017)
List of Figures
List of Tables
1. Introduction
2. Ideology, Nationalism and Fascism
3. Right-Wing Authoritarianism and Authoritarian Capitalism
4. Trumpism: Donald Trump and Authoritarian-Capitalist Statism
5. Trumpology: Donald Trump’s Ideology
6. Trump and Twitter: Authoritarian-Capitalist Ideology on Social Media
7. Conclusion: Authoritarian Communicative Capitalism and its Alternatives
References
Index
Published by Pluto Press in Feb 2018
Paperback ISBN: 9780745337968
eBook ISBN: 9781786802828

Authoritarian Capitalism in the Age of Social Media

‘We need an Internet and a world that serve the many, not the few.’ Christian Fuchs on the plethora of nationalist and racist ideologies plaguing our timelines.

END_OF_DOCUMENT_TOKEN_TO_BE_REPLACED
Back to Top
X