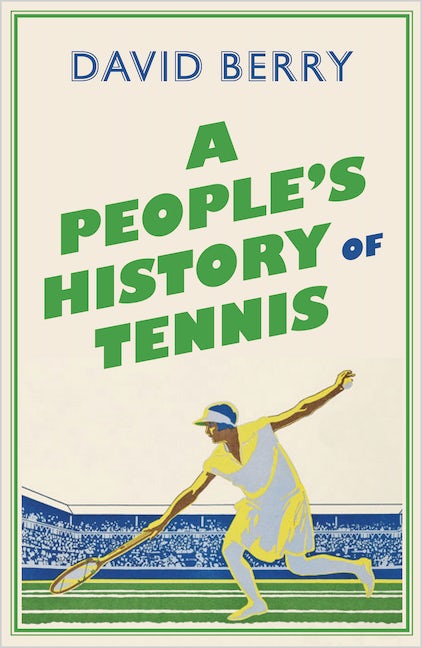 A People's History of Tennis

Tennis is much more than Wimbledon! This story reveals the hidden history of the sport.

Pristine lawns, tennis whites, strawberries and cream, tennis is synonymous with the upper echelons of society, but scratch beneath the surface and you'll quickly discover a different history, one of untold struggles on and off the courts.

From the birth of modern tennis in Victorian Britain to the present day, we bear witness to struggles around sexuality, gender, race and class that have transformed the nature of tennis and sport itself. A People's History of Tennis is populated by diverse voices, recounting the sport's gay origins, 'Workers' Wimbledon', battles for gender equality and more.

Going beyond centre court, this book reveals the hidden history of the game, providing a rich account of the challenges faced and victories won.

David Berry is a writer, journalist and filmmaker. He has written about health and leisure for a variety of publications, and for twenty-five years he was a documentary director for the BBC. He has been playing tennis since he was eleven years old.

'A persuasive case for tennis as a great democratic game' - Tim Adams, Observer

'Great news - playing tennis is not inconsistent with radical politics. This is just one of the fascinating facts in this amazing history of our sport' - Lord Richard Layard, Emeritus Professor of Economics at the LSE and co-author of 'Thrive: The Power of Psychological Therapy'

'David Berry's delightfully gossipy book delves into the personal histories of tennis players famous and unknown. He lovingly charts the progress of the game since its beginnings in the Victorian period and explains why so many people, players and spectators, love it' - Elizabeth Wilson author of 'Love Game: A History of Tennis, from Victorian Pastime to Global Phenomenon'

'A suffragette plot to burn down Wimbledon, Jewish quotas at your local tennis club, All England Married Couples Championships - you think you know tennis and then along comes this compelling little gem by David Berry, positing a progressive social history of the sport that surprises and delights. Hugely enjoyable and highly informative' - David Cohen, Investigations Editor at the London Evening Standard

'This antidote to cream teas and privilege celebrates tennis and its enthusiasts through the sport's hitherto silenced stories. A great read' - Kath Woodward, Professor of Sociology, Open University and author of 'Social Sciences: The Big Issues'

'We might think of lawn tennis as a sport of the privileged, but this fascinating, beautifully written book reveals that in its 150-year history it has been played with passion by women, lesbians and gays, ethnic minorities and socialists alike' - Lucy Bland, Professor of Social and Cultural History, Anglia Ruskin University and author of 'Brown Babies'

'A fluent and enjoyable history of tennis' - Norma Clarke

'Berry's potted history makes for a lively, informative read ... and above all, makes you want to pick up a racquet' - Emily Bootle, New Statesman

Five LGBTQ+ players who changed the face of tennis

PODCAST: ‘Radicals in Conversation’
A People's History of Tennis

From the birth of modern tennis in Victorian Britain to the present day, A People’s History of Tennis lays bear struggles around sexuality, gender, race and class that have transformed the nature of tennis and sport itself....

END_OF_DOCUMENT_TOKEN_TO_BE_REPLACED
Back to Top
X