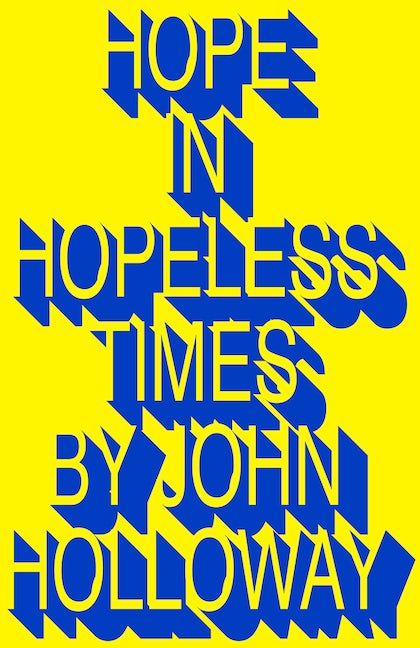 At a low point for the left, one of the world's leading Marxist philosophers demonstrates the grounds for revolutionary hope

Hope lies in our richness, in the joy of our collective creativity. But that richness exists in the peculiar form of money. The fact that we relate to on another through money causes tremendous social pain and destruction and is dragging us through pandemics and war towards extinction.

Richness against money: this battle will decide the future of humanity. If we cannot emancipate richness from money-capital-profit, there is probably no hope. Money seems invincible but the constant expansion of debt shows that its rule is fragile. The fictitious expansion of money through debt is driven by fear, fear of us, fear of the rabble. Money contains, but richness overflows.

In this final part of his ground-breaking trilogy, John Holloway expertly fuses anti-capitalism and anti-identitarianism, and brings hope into the critique of political economy and revolutionary theory, challenging us to find hope within ourselves and channel it into a dignified, revolutionary rage.

'With a sure touch, Holloway gathers in this volume what he has sown in a life of militancy'

- Antonio Negri, author of 'The End of Sovereignty'

'John Holloway has a great talent for working through complex, erudite, intellectually satisfying arguments in wonderfully readable prose. His uncompromising critique of capitalist control and his affirmation of 'the rabble' in this book serve as antidotes to some of the poisons we are subjected to in contemporary society'

'A wonderful call to fight and destroy the monstrous capitalist Hydra'

'We are at the point zero of a history where everything must disappear or be reborn. For the first time, a movement is growing without leaders or external organisation, with the freedom to become really human. John Holloway is one of those who discern in this poetry of overflowing an uprising of life'

- Raoul Vaneigem, author of 'The Revolution of Everyday Life'

'The world is driving towards a catastrophe. Against the current trend, John Holloway argues that even in hopeless times hope should not be abandoned. To some that may seem too optimistic, but Holloway's reflections are important, and must be engaged with'

'This is Holloway at his subversive best'

- Werner Bonefeld, lecturer in Politics at the University of York

'In this finale to his remarkable trilogy, Holloway's work reaches a crescendo as he captures and chokes that darkest of forces, the veritable Hydra of money'

- Anitra Nelson, author of 'Beyond Money: A Postcapitalist Strategy'

Part II We must re-learn hope

END_OF_DOCUMENT_TOKEN_TO_BE_REPLACED
Back to Top
X