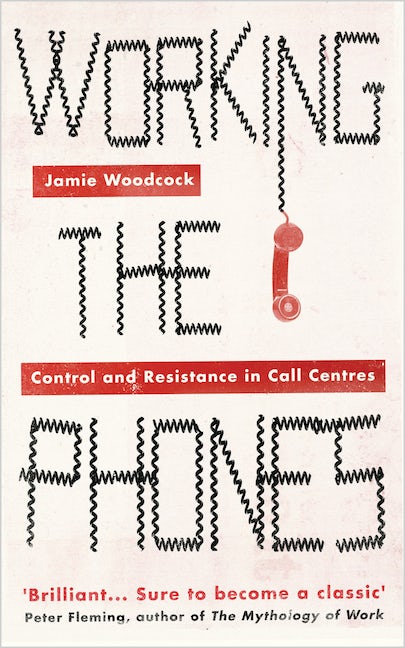 Control and Resistance in Call Centres

Over a million people in the UK work in call centres, and the phrase has become synonymous with low-paid and high stress work, dictatorial supervisors and an enforced dearth of union organisation. However, rarely does the public have access to the true picture of what goes on in these institutions.

For Working the Phones, Jamie Woodcock worked undercover in a call centre to gather insights into the everyday experiences of call centre workers. He shows how this work has become emblematic of the shift towards a post-industrial service economy, and all the issues that this produces, such as the destruction of a unionised work force, isolation and alienation, loss of agency and, ominously, the proliferation of surveillance and control which affects mental and physical well being of the workers.

By applying a sophisticated, radical analysis to a thoroughly international 21st century phenomenon, Working the Phones presents a window onto the methods of resistance that are developing on our office floors, and considers whether there is any hope left for the modern worker today.

'Jamie Woodcock's brilliant insider account of life in a British call-centre reveals the dirty realities of digital capitalism ... a book that is sure to become a classic' - Peter Fleming, author of The Mythology of Work (Pluto, 2015)

'In this urgent and incisive study, Woodcock identifies the imposing challenges to organising against exploitation in conditions of atomised precarity, while also giving us precious glimpses of what a counter-offensive against capital might look like. A masterful lesson in how sociology can serve both to interpret and change a world of labour under the pall of austerity' - Alberto Toscano, Reader in Critical Theory, Department of Sociology, Goldsmiths, University of London

'Woodcock knows not only his theory but his subject inside out. There's casualisation, cruelty and regimentation, but also subversion, and his focus on employee resistance offers a flicker of hope' - Times Higher Education

'Everyone should read Jamie Woodcock's book' - Manchester Review of Books

'An important contribution to the sociology and anthropology of work&mdash;especially in its laudable effort to understand the conditions of call centers, which might be the most paradigmatic job among the world&rsquo;s growing ranks of precarious workers' - Anthropology of Work Review

'Written in an accessible style, this in-depth study of workplace resistance is highly recommended' - Work, Employment and Society

Lessons on Resistance from Deliveroo and UberEATS

Jamie Woodcock examines the radical possibilities for resistance born of ‘black box’ labour, looking at the recent activism by employees of UberEats and Deliveroo.

END_OF_DOCUMENT_TOKEN_TO_BE_REPLACED

In this video, author Jamie Woodcock talks about about his experience of working undercover in a call centre, and the insights he brought to his new book Working the Phones: Control and Resistance in Call Centres.

What’s Wrong with Modern Work? On the failure of the Taylor Review

The failure of the Taylor Review to advocate for workers suggests a solution will only come from struggle within. Jamie Woodcock looks to Engels’ report on 19th century workers, which could offer a blueprint for a counter-offensive.

END_OF_DOCUMENT_TOKEN_TO_BE_REPLACED

In this video, author Jamie Woodcock talks about about his experience of working undercover in a call centre, and the insights he brought to his new book Working the Phones: Control and Resistance in Call Centres.

Over a million people in the UK work in call centres, and the phrase has become synonymous with low-paid and high stress work, dictatorial supervisors and an enforced dearth of union organisation. However, rarely does the public have access to...

END_OF_DOCUMENT_TOKEN_TO_BE_REPLACED
Back to Top
X