I stand with Jeremy Corbyn

In the week that Jeremy Corbyn was suspended from the Labour Party, David Rosenberg looks back to the times he showed up and stood up for the oppressed in his community.

Janaury 2015: My publisher Pluto Press were excited when they received an endorsement for my new book about radical walks in London, Rebel Footprints, which was due out in March. They had asked for 35-60 words. The endorser wrote 150 and a typically diffident cover note: ‘I have enjoyed the book so much… hope I am not too late with my message.’

It was from my local MP, Jeremy Corbyn. I wasn’t in the Labour Party then, but I saw him frequently at local campaigning events, or in the street. I re-joined when he stood for Labour leader later that year, but we had known each other since the late 1980s.

‘… this book brings alive the memory of ordinary people doing extraordinary things … migrants from far and near… poor and exploited … radical walks are vital for our children to both defend what we have and demand justice and peace.’

Jeremy knew me as a local primary school teacher with a passion for social history, frustrated at the way both New Labour then the Tories had narrowed the formal history curriculum, culminating in Michael Gove’s dull, monocultural, Empire-friendly story of Britain. Jeremy’s alternative vision was a layered multicultural history curriculum built around the struggle for rights.

I heard him articulate that vision alongside Dawn Butler MP and kindertransport refugee Lord Dubs when Labour’s launched its Race and Faith Manifesto during the 2019 election campaign. He spoke about the ‘Emancipation Education Trust’ that would integrate black history into mainstream history teaching.

There were plenty of TV cameras and journalists there, but their stories focused instead on a gaggle of far-right Zionists who parked lorries nearby with hoardings denouncing Jeremy and Labour as racists. Others highlighted the (unelected and pro-Tory) Chief Rabbi’s op-ed for The Times the evening before this launch, branding Jeremy an antisemite ‘unfit for office’, and predicting dire consequences ‘for Jews, Judaism and the State of Israel’ if he became PM.

Jeremy’s enthusiasm for progressive education shines through his monthly reports at Islington North CLP meetings, which routinely include vivid accounts of projects in the local schools he has recently visited.

Back to 2015, and the book launch of Rebel Footprints. Jeremy spoke beautifully about how we can draw inspiration from our radical history. He had to leave early to cycle back to Finsbury Park for a Kurdish community event celebrating Newroz (new year). The warmth of his relationships with Islington’s diverse refugee communities has always been palpable. 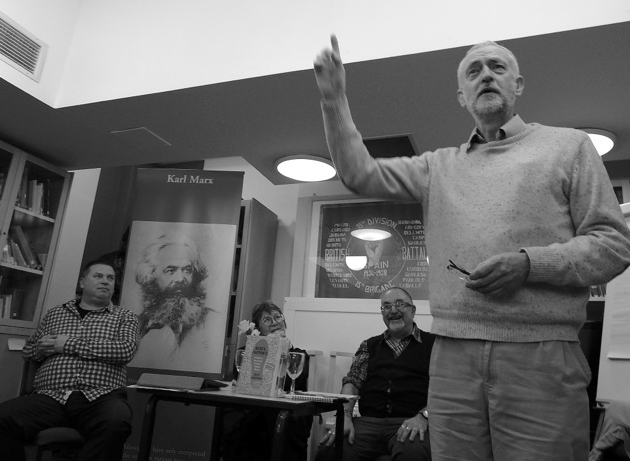 That summer I chatted with Jeremy at a demonstration that summer shortly after he entered Labour leadership race. He was the 200/1 outsider in a 4-horse race. I asked him, ‘What are you going to do if you win?’ He laughed at the unlikely prospect. I sensed how pleased he would be to finish third not fourth.

I remember gathering near Marble Arch for a refugee rights march two months later. People were glued to their phones. Suddenly, a huge roar, as news came through of Jeremy’s victory. After his acceptance speech he headed straight to the demonstration. Refugee rights were not just something you vote for in Westminster, but you campaign for on the streets.

The excitement generated through his leadership campaign in 2015 grew into the extraordinary election campaign of 2017 where he recovered millions of votes squandered by New Labour and enthused a generation of first time voters. Instead of the Tory landslide, the media promised, Theresa May lost her majority in a hung parliament. Around 2,500 votes spread across a few constituencies prevented Labour from forming a minority government, despite the internal sabotage documented in Labour’s infamous Leaked Report.

The fear of a government that seriously threatened to redistribute political and economic power in favour of the impoverished and oppressed, unleashed the most ferocious all-out war across the establishment to destroy Jeremy politically and psychologically (he even received death threats). The stoicism with which he endured these attacks illustrates his inner strength, but I extend that to his family who continue to face an unbelievable level of harassment and intrusion in their lives.

October 2016: The 80th anniversary of the Battle of Cable Street. I convened an event that involved a march starting at Altab Ali Park, Aldgate and finishing in St George’s Gardens, Cable Street. Our 30 speakers included MPs, councillors, trade unionists, Bengali, Jewish, African-Caribbean, Irish activists and a Cable Street veteran, Max Levitas. Our final speaker who ended the rally on a powerful note was Jeremy. He spoke movingly of learning about Cable Street from his mother who was there in 1936 as a young demonstrator.

To protect Jeremy from harassment by hostile journalists as he arrived, we enacted a stewarding plan to smuggle him in to the Unite Community office in the basement of the building backing on to the rally venue. Several stewards inside the office were young volunteers from the Bengali community. They were overjoyed when he produced a cake for them to share while they were working!

November 2019, the General Election campaign: Jeremy travelled all over Britain. We made a plan to use his limited time in his own constituency well. Instead of door-to-door knocking in side streets, we organised a walkabout along Holloway Road. It took two hours to progress 100 yards as people came to talk to him, ask questions, or offer love and support. My partner Julia took a photo that went viral. Jeremy was deep in conversation with a Jewish student who questioned him closely about issues around Labour and antisemitism.

As they conversed, other young people came closer.  A black youth has his arm round Jeremy as the conversation unfolds. The self-defined ‘leaders’ of the Jewish community shout their accusations and allegations from a distance. None of them have shown the willingness of that student to simply have a respectful exchange of views.

Last Thursday: the day that Jeremy learned from a photographer who had seen a tweet, that he was suspended by the Labour Party. One of my sons’ friends shared a Facebook post about his partner who had just seen Jeremy outside the community centre where their child attends nursery: ‘She said he looked worried, but seemed genuinely pleased when she smiled. If I’d had the day he’s had, I’d probably have sacked it off , not our Jeremy though. And that’s why everyone round here loves him.’

Saturday: I read a facebook post by Ben, a young trade unionist who took part in an educational trip to Krakow and Auschwitz last October that I have helped organise in recent years. This year’s trip was cancelled because of COVID. Two-thirds of the 60 participants last year came from several trade unions.

‘A year ago today I was lucky enough to go on a trip to Krakow to learn more in depth about the struggle of Jewish people under Nazi rule and the horrors of the holocaust… (and) the antisemitism that was rife in Poland at the time. Jeremy Corbyn sent us a message of solidarity on our first night … with his usual unwavering comradeship, anti-fascist and anti-racist stance. The events of the last couple of days remind me of that message. I’ve never seen such genuine passion about a topic as I did when he spoke. Those few days surrounded by the horrors of antisemitism both past and present reinforced the fact that racism of all kinds has no place in society, and highlighted the true efforts of individuals and groups to stamp it out. To reward these efforts by suspending Jeremy Corbyn is … a travesty and a betrayal to the anti racism movements around the world.’

David Rosenberg is an educator, writer and tour guide, and author of Rebel Footprints: A Guide to Uncovering London’s Radical History (Pluto, 2015) and Battle for the East End (Five Leaves, 2011). Since 2008, he has led tours of key sites in London’s social and political history. 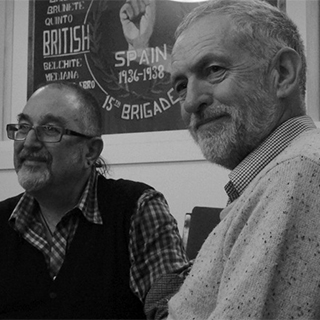