by Stephen Crossley
BUY THE BOOK

Mapping analyses of mining communities is one of the best ways to reveal the ideological layers that envelop modern politics. From the ‘deserving poor’, to austerity’s ‘welfare scrounger’ – or the ‘left-behinds’ if you’d prefer the pitying liberal consensus – these analyses betray a stigma attached to disadvantaged people; promoting an idea of difference and thus social exclusion. Stephen Crossley, author of In Their Place: The Imagined Geographies of Poverty, examines how our understanding of former mining communities is, often misleadingly, shaped by these studies.

All of the books from our Radical Geography Series are now half-price!

The phrase ‘ex-mining community’ has, in the wrong hands, become a heavily-loaded signifier for media commentators and policy intellectuals wanting to describe white working-class communities that they regard as out of time and out of touch with wider society; unable to keep pace with modern developments and wider societal ‘progress’. Sociologist Steph Lawler has argued that popular depictions of mining communities often mark them out as ‘inhabiting anachronistic space’.

Recently, a piece in The Observer highlighted the deprivation experienced by residents of Horden, a ‘once-proud community’ and ‘a former mining village’ in East Durham. Black and white photographs of pit ponies at Horden colliery in the 1920s and of miners in the welfare club playing dominoes in the 1960s adorn the piece. The article provides an exemplar of the way in which disadvantaged neighbourhoods are stigmatised and portrayed as different, helping to contribute to the ‘Othering’ of people who reside in, or close by, them. Othering has been described as a way of asserting difference and drawing a line between one group and another: in this case between ‘them, the poor’ and ‘us, the non-poor’. The opening sentences of the article stated:

For years, the “numbered streets” in Horden have inspired dread among even the most hardened of local residents. Plagued by endemic crime and chronic poverty, some villagers are even afraid to venture onto them in daylight.

The author of the piece, Mark Townsend, goes on to write of ‘the network of drug dealers that has infested the village’, that ‘a third of the housing stock lies boarded up on Twelfth Street or has been converted into drug dens’, and of the streets populated by ‘malnourished families begging for food’. For Townsend, former coalfield areas are ‘statistically distinct from the rest of the UK’; they are places cut-off from the mainstream. Townsend further pursues this argument, commenting on poor transport networks in the village; neatly linking physical isolation with social exclusion. The article thus provides a near-perfect articulation of what E.V. Walter referred to as the myth of ‘dreadful enclosures’ whereby ‘certain milieu gather reputations for moral inferiority, squalor, violence, and social pathology’ and where ‘sick and dangerous people drift together in a kind of behavioural sink’.[i]

Phrases such as ‘plagued’ and ‘infested’ and ‘drug dens’ are intended to invoke filth-ridden places and the spread of disease, this conjuring up of the perception of dirt and uncleanliness does an enormous amount of symbolic work. Metaphors of dirt have long been synonymous with the idea of an ‘underclass’. The social policy academic John Macnicol has highlighted how mentions of dirt and squalor were used in the 1950s to describe the ‘problem families’ of the day in:

‘highly charged class-prejudicial accounts … that gave the impression that a large section of the British working class were the ‘great unwashed’ living lives of dirt, disorder and incorrigible irresponsibility, their bodies riddled by headlice and impetigo, lacking elementary domestic manners and culturally alienated – in short, urban savages of the worst kind’.[i]

When Charles Murray travelled across the Atlantic in 1989 and arrived in the UK to promote his racially charged idea of an ‘underclass’, he declared that he was a ‘visitor from a plague area come to see whether the disease is spreading’. As George Orwell noted in A Road to Wigan Pier, it may matter little if ‘the average middle-class person is brought up to believe that the working classes are ignorant, lazy, drunken, boorish and dishonest; it is when he is brought up to believe that they are dirty that the harm is done’.[ii] Metaphors of infestation and plagues are reserved for poorer communities. Journalists do not speak of investment banks being ‘infested’ with chancers and rogue traders, nor do they write of affluent areas such as Knightsbridge or Mayfair being ‘plagued’ by Russian oligarchs or overseas investors. Multicultural urban neighbourhoods are not generally described as being ‘swamped’ by the gentrifying middle-classes.

Townsend quotes the manager of a new community centre in the ‘numbered streets’ as saying that ‘the actual way of life around here causes problems’. This phrase is worryingly reminiscent of Oscar Lewis’ long-discredited ‘culture of poverty theory’ which asserted that people living in poverty was not owing to material processes, but because their lifestyle and behaviour did not allow them to improve their lives. Lewis’ research, conducted with small numbers of families in Latin American countries, and his theorising that flowed from it, were subjected to immediate critique in the USA in the 1960s, but his ideas have endured, even when he has argued that they have been misinterpreted and misused.

The manager of the centre goes on to say that he believes around 85% of residents ‘have a mental health illness such as anxiety and depression, or post-traumatic stress disorder’ and that people in Horden ‘feel forgotten about’. Such statements are not contested, and it is indeed difficult for anyone to argue with someone who deals with the impact of poverty and deprivation every day. But there are numerous studies which have shown that local practitioners views are not necessarily objective or grounded in empirical reality. Alan Deacon’s seminal book ‘In search of the scrounger’, published in 1976, highlighted how, in the 1920s interviewing officers involved in the administration of unemployment benefit were ‘convinced of their ability to spot a scrounger’ which he called ‘a groundless and dangerous faith’ and which led to them neglecting their duty to help claimants secure work. More recently, in research undertaken in Teesside and Glasgow, sociologists searching for households where ‘three generations had never worked’ suggested that the idea of such households was ‘well-known’ to local practitioners:

It was one that they often drew on in trying to understand the situations of the families with which they worked. For instance, a regeneration manager in Glasgow stated that he had heard, anecdotally, of families where three generations had never worked but stated that his organisation did not record such information. Similarly, a Job Centre Plus manager told us she did not know of any directly but she had also ‘certainly heard’ of families where three generations had never worked.[iii]

Despite the investment in this idea, ‘when pushed to identify families where ‘three generations had never worked’ these practitioners, working in some of the most deprived neighbourhoods of two of the most deprived urban areas of England and Scotland, were unable to do so’. As discussed in a previous blog, seeing close-up how a small number of people behave whilst enduring unbelievable pressures does not necessarily give anyone a better idea of the hidden determinants of that behaviour, or how widespread it is amongst a certain community. Seeing the effects of poverty does not mean you are uniquely positioned to identify its causes.

But two myths about Horden propagated in the article stand out. Firstly, the idea that local projects can address the marginalisation the people living there face is worrying and insidious. Local community centres such as the one mentioned in the article are often advanced as ‘solutions’ by politicians and journalist who are keen to promote ‘empowering’ stories of local change, which leave the existing structure of society largely untouched and in place. If all that is required to improve such area is relatively small philanthropic gestures, and voluntaristic initiatives then there is no need for widespread societal reform. Small local projects can do a lot, but they should only ever form part of any proposed solution, not the main thrust of it, and nor are they capable of countering situations made worse by central and local governments. Promoting such local solutions merely maintains the focus on disadvantaged areas, ensuring that political decisions taken many miles away, and made largely by privileged individuals remain relatively free from scrutiny.

It is however, the idea that places such as Horden are ‘forgotten’ and ‘neglected’ that is one of the most pernicious ideas in the article. Working-class communities, social housing estates and disadvantaged neighbourhoods have been subjected to intense scrutiny and political action in recent years and have been absolutely central to the government’s social policy and economic reforms.

Wave after wave of welfare reforms have targeted already impoverished groups and areas, pushing many of them further into poverty. Increased conditionality within the welfare system has ensured that many people on out-of-work benefits are having to regularly ‘prove’ either their disability or illness or their job-seeking activity to state officials. Pushing people into low-paid poor-quality work of any kind is vital to a government more interested in reducing ‘worklessness’ than it is about eradicating poverty.

Changes to local government funding has meant that the most disadvantaged areas have received the biggest cuts in funding with more affluent areas seeing much smaller reductions. The Architects for Social Housing have recently produced a map which shows over 180 estates in London that are subject to demolition or ‘regeneration’ plans. In discussing thee plans, Lisa McKenzie observed that ‘council estates continue to be demolished while second homes remain untouched’.

Myths and phantasms of terraced streets in ‘ex-mining communities’ and other ‘dreadful enclosures’ do little to help alleviate the marginalisation they experience. The deprivation and hardship in such areas is real enough that it does not require embellishment by journalists wanting to spice things up for their largely metropolitan readership, just as the early ‘slummers’ of Victorian times did.[i] But all the while this type of ‘re-presentation’ of impoverished areas persists, the people and institutions that encourage and benefit from such poverty, remain out of sight. 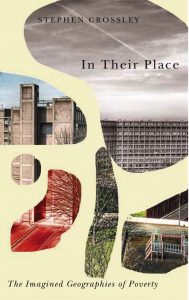 Stephen Crossley is Senior Lecturer in Social Policy at Northumbria University. He previously worked on a regional child poverty project in the North East of England and has also worked in local government and with local voluntary sector organisations in neighbourhood youth work and community development roles.

In Their Place: The Imagined Geographies of Poverty by Stephen Crossley is available from Pluto Press.