The Truth about the Fight Against Fossil Fuels

by Simon Pirani
BUY THE BOOK

Coal, gas and oil have been capitalism’s main fuels since the industrial revolution. And yet, of all the fossil fuels ever consumed, more than half were burned in the last 50 years.

In this blog, Simon Pirani, author of Burning Up, outlines the steps we need to take to tackle the technological, social and economic systems that burn fossil fuels and make effective changes in the fight against global warming.

When politicians and diplomats meet in Katowice, Poland, in December for the 2018 round of international climate negotiations, they will not even pretend to aim at cutting greenhouse gas emissions – mostly from burning fossil fuels – far enough to prevent dangerous climate change.

The negotiators’ modest aim is to leave Katowice with an agreed procedure for monitoring implementation of promises that countries made to reduce their greenhouse gas emissions at the Paris climate conference in 2015.

Even if all the governments involved keep all their promises (like that has ever happened!), by 2100 we are heading for global average temperatures 2.6 degrees above the pre-industrial level. The Paris agreement itself said that margin should be ‘well below’ 2 degrees, and that countries would ‘endeavour’ to keep it to 1.5 degrees.

The failure in Paris to make the climate arithmetic add up was the culmination of decades of failure by the world’s leading states to slow down, let alone reverse, consumption growth of fossil fuels (coal, oil and gas) – which is the source of about three quarters of all human-made greenhouse gases.

Greenhouse gas emissions from burning fossil fuels in 2017 were 56% higher than they were in 1992, a quarter century earlier, when the first international agreement to tackle climate change was made at the Rio summit. 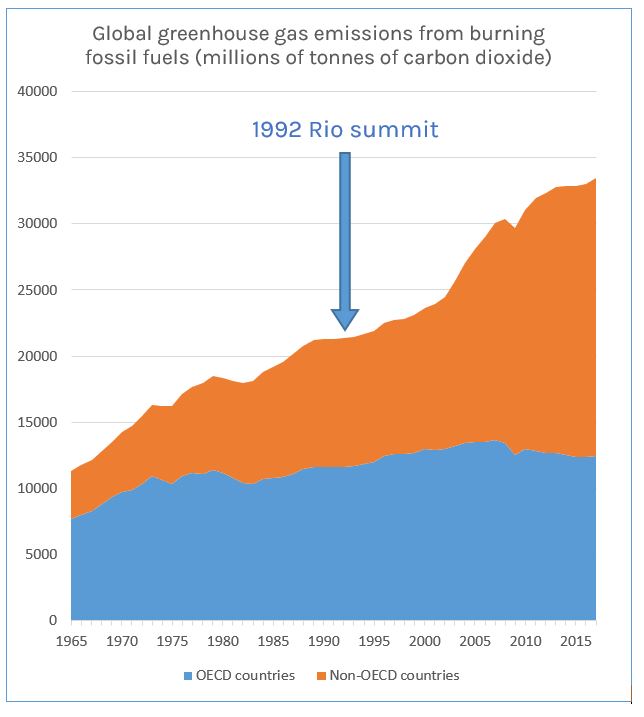 Public discussion of ‘solutions’ to the greenhouse gases problem is dominated by two types of arguments. The first concerns individual consumers. Politicians and some environmental NGOs appeal to those in rich countries to reduce their consumption of fuels and fuel-intensive products; alarmists on the right warn that as living standards in India and China rise, fuel consumption levels there will rise too, cancelling out progress in the global north

The second type of ‘solution’ is technical: electric cars will be ‘cleaner’, the internet will reduce the need for lugging lots of stuff around, and so on. The ‘green growth’ strategies embraced by the US Democrats and many European governments, and by a big proportion of trade union leaders internationally, rely heavily on companies adopting such solutions.

And just such a corporate shift has produced the single noticeable sign of progress away from fossil fuels: a significant increase in some European countries, and parts of China, in electricity generation from renewable sources (e.g. wind and solar), mainly at the expense of coal.

But dishonesty and double-think runs through much discussion of techno-fixes. Electric cars, for example, will only cut fuel consumption substantially if the electricity on which they run is produced from 100% renewables. And that’s the hard part: excepting Denmark, a special case, even leading renewables nations have not worked out how to make the leap from producing a fifth or a quarter of electricity from wind and solar to figures higher than 50%. And even if oil consumption really falls, the manufacture of cars and car-based urban infrastructure exacts a huge toll in fuel terms.

Appeals to individual frugality ignore an equally fundamental point: individual consumers are at the end of big technological systems through which fuels flow. These systems do much more to determine the level of consumption per head than people do themselves.

You can choose a ‘green’ supplier who sells you electricity produced from renewables, but you cannot individually opt to move away from the whole now-outdated concept of centralised electricity generation towards integrated energy systems. You cannot individually opt for building standards that reduce the use of fuel-intensive materials and require near-zero-energy buildings that have long been technologically feasible.

It is the technology-society nexus to which I repeatedly found myself returning, when writing a book on the history of fossil fuel consumption since 1950, published this month by Pluto. This history will hopefully provide insights into this relationship, from which the discourse around the international climate talks relentlessly diverts attention.

Take road transport, which accounts for around a quarter of all fossil fuel burned. The manufacture of cars with internal combustion engines, predominantly in the US, started before the first world war, with the installation of the first automated production lines in Detroit in 1910-14. During the war itself, motor transport was developed for military purposes.

In the inter-war period, in the US, cars became a mass phenomenon. The industry was consolidated, into three huge corporations and a few slightly smaller ones. General Motors, one of the three, pioneered planned obsolescence, that devastatingly effective sales technique, when it introduced the annual style change in 1924. The motor manufacturers also took the lead in sophisticated political lobbying methods, that were used to support road infrastructure construction and to undermine alternative forms of transport. Public transit in cities, and railways between them, were permanently damaged in the US as a result.

The second world war gave a huge impetus to road and air transport infrastructure for military purposes; the post-war boom gave rise to a new expansion of car manufacture. And the political support for it hit a new apex with the US’s government-funded highway construction programme, which cost at least four times as much as the entire Marshall Plan (US aid to post-war reconstruction in Europe).

From the 1950s, the US system of car-based transport was copied in Europe. Cities were re-made: roads and parking spaces covered ever greater proportions of their land; suburban housing mushroomed and the daily commute became the stuff of nightmares.

Efforts were made to export the car-based city model to the global south from the 1980s, and to former Soviet countries from the 1990s. These efforts were supported by the international financial institutions, who were already aware of the cost in terms of global warming and city dwellers’ health. The capitals of middle-income nations became synonymous with air pollution and hours-long traffic jams.

Meanwhile, in the rich countries, regulators, under pressure from environmentalists, tried – and mostly failed – to compel manufacturers to make smaller, lighter, more fuel-efficient cars. The car corporations used their lobbying skills to resist. In the US, they convinced drivers to switch to Sports Utility Vehicles (SUVs), so that by the year 2000 more than half the vehicles on US roads were classified as trucks.

Atlanta in the US became the symbol of car-dependent living: its transport-related carbon emissions are 11 times higher per head than those of Barcelona, Spain, which has similar population and GDP per capita, and 100 times higher than those of Ho Chi Minh city, Vietnam.

In the mid twentieth century, the corporate chiefs, politicians and others who ensured the dominance of car-based transport systems sought to normalise the perils of air pollution and the huge death toll from traffic accidents. They did not know about global warming: neither did climate scientists, for sure, until the mid-1980s. But even after the facts of climate change were acknowledged by governments, car-based transport remained central to urban development.

Car-based transport systems, and the urban infrastructure that supports them, are only one of the technological systems through which fossil fuels are mainly consumed. Other major users include electricity networks; industrial systems reliant on carbon-heavy materials like steel; industrial agriculture systems that soak up gas-based fertilisers; aviation; and the military. Capitalism not only exploits technologies, as it does the workers who use them; it shapes those technologies for its own purposes.

The roads taken by urbanisation, industrialisation and electrification under capitalism were not inevitable, not socially just and not fuel-efficient. The post-second-world-war boom hastened all these trends, underpinned by cheap fossil fuels. The 1970s oil price shocks caused political and corporate elites to realise that the supply of fuels would not always be unlimited or cheap, and they found ways to adjust. Technological changes to the labour process, paradoxically, made aspects of it more fuel intensive as often as it produced improvements. Mass consumption and consumerism, overwhelmingly in the global north, grew in this context.

Today, the consequences of unsustainable fossil fuel use – above all, its role in global warming – are known to us all. There are no simple formulae for the transition away from fossil fuel. Answers must be sought outside the discourse around the international climate negotiations. These answers must take account of the way that technological systems are embedded in social and economic systems, and point to ways to transform all of them.

Simon Pirani is Senior Visiting Research Fellow at the Oxford Institute for Energy Studies, and is the author of Change in Putin’s Russia (Pluto, 2009).

Burning Up: A Global History of Fossil Fuel Consumption by Simon Pirani is available to buy from Pluto Press.