Our guests bring Marxist analysis out of the 19th century textiles mill, and into the call centres, office blocks and fast food chains of modern Britain, to reassert how core Marxist concepts are vital to understanding increasing pay inequality, decreasing job security, increasing routinisation and managerial control of the labour process.

Social class remains a fundamental presence in British life in the twenty-first century. It is woven into the very fabric of social and political discourse, undiminished by the end of mass industry; unaugmented despite the ascendancy of ‘ordinary working people’ and other substitute phrases. Absent from this landscape, however, is any compelling Marxist expression or analysis of class.

Providing a critical analysis of competing perspectives, Umney argues that class must be understood as a dynamic and exploitative process integral to capitalism – rather than a descriptive categorisation – in order for us to better understand the gains capital has made at the expense of labour over the last four decades.

‘Charles Umney presents a powerful and nuanced alternative narrative driven by Marxist political economy. With a keen eye for irony, paradox, and the absurd, he analyses work, politics, and technology in capitalist societies. This is a witty and wise antidote to the mainstream diagnoses of our times’ – Professor Ian Greer, Cornell University

‘By reinstating the importance of Marxist analysis for understanding the relationship between class and social inequality in 21st century Britain, Charles Umney has written a highly cogent and perspicacious account of the formation of contemporary inequality and exploitation… a vital source’ – Professor Paul Stewart, former editor of Work, Employment and Society

Barbara Samaluk is a Postdoctoral Research Fellow at the Department of Human Resources and Organisational Behaviour, University of Greenwich. Through her research projects she has actively cooperated with trade unions and emerging social movements. She has presented papers and organised international workshops and special sessions at international conferences, published book chapters, reports, commentaries and articles in academic journals, such as Work, Employment and Society, Industrial Relations Journal and Ephemera.

Richard Seymour is a writer and broadcaster, activist and owner of the blog Lenin’s Tomb. He is the author of books such as The Meaning of David Cameron (2010), Unhitched (2013), and Against Austerity (2014).

END_OF_DOCUMENT_TOKEN_TO_BE_REPLACED 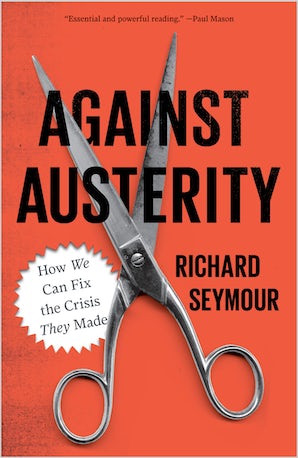 How we Can Fix the Crisis they Made

A blistering, accessible and invigorating polemic against the current political consensus.
END_OF_DOCUMENT_TOKEN_TO_BE_REPLACED
All events
X