Can Don’t Pay UK be the next Poll Tax movement?

by Simon Hannah
BUY THE BOOK

The fight to stop the Poll Tax in the 1980s was a social movement that brought down one of the most powerful British Prime Ministers of the 20th Century, Margaret Thatcher. Today, we find ourselves in a similar position, with the Don’t Pay UK campaign galvanising people into political activism through non-payment. Simon Hannah, the author of Can’t Pay, Won’t Pay: The Fight to Stop the Poll Tax looks at whether there are comparisons and lessons to me made between the two inspiring movements.

As global inflation begins to soar, the cost of everyday items is increasing beyond the reach of many. One of these is energy bills which are particularly high in Britain after years of neoliberal deregulation, privatisation and financial speculation.

Heading into winter, some people could face monthly energy bills of several hundred pounds, a cost they simply cannot afford. Millions are already in energy debt and millions more are projected to fall behind with payments this year. A new organisation Don’t Pay UK has been launched to organise a ‘bills strike’ signing people up to a pledge to not pay their bills. They demand the government reintroduce the energy bills cap to April 2021 levels as an emergency measure before working to ‘bring prices down further and on a sustainable basis’.

Over one hundred thousand people pledged to refuse to pay their energy bills when the price cap was increased in October. This mass non-payment campaign is inspired by and has inevitable similarities with the anti-Poll Tax movement of 1989-1991. I write about the history of that struggle in Can’t Pay, Won’t Pay as it is a fascinating and politically rich moment in the history of popular resistance in Britain.

In many ways we have a similar context to the poll tax, a decade of Tory rule, massive social inequality, a government mired in corruption and reactionary ideological beliefs. But are the two non-payment campaigns as similar as they seem on the surface? Will the energy bills crisis become a Poll Tax moment for the government?

The demand of the anti-poll tax movement was to scrap the Community Charge – a flat rate cost for every resident in a given area to fund local government. This was essentially a highly regressive tax, not taking into account wealth or property. The battle raged from council chambers to court rooms to council estates as mass opposition challenged local government, bailiffs, judges and MPs.

A key difference with today’s energy bills issue is that it is happening in the context of wider inflationary crisis, energy prices exist alongside a multitude of other growing expenses. Consumer energy bills are only one aspect of the wider price rise crisis. This could however provide the starting point for a wider fight over price controls over wages and benefits.

The non-payment of energy bills campaign isn’t directed at local government but instead is intended to cause a crisis for the energy companies that then has political repercussions. This has a slightly different dynamic but if it led to protests outside energy companies, mobilisations to prevent installation of pre-pay meters at non-payers houses then it could take on a similar feel to the Poll Tax. The key is to make the collection of energy bills so difficult and economically and politically costly that it forces action.

A problem will be the number of people already on pre-pay meters – their power just goes off immediately. Can they unite with people on Direct Debits who might have months before they even get a letter from their energy provider?

The anti-Poll Tax movement was led by the Anti-Poll Tax Federation which was itself influenced and controlled by the Militant Tendency, a radical-left group in the British Labour Party. Other socialist groups and anarchists were also heavily involved at local, regional and national level. This gave the movement an organisational backbone of thousands of political cadres and activists, organising countless local meetings so the mass non-payment idea took deep roots in working class and middle class communities and area.

It also had MPs publicly declaring they wouldn’t pay and prominent activists with a national profile like Tommy Sheridan, who acted as spokespeople for the movement.

The energy bill non-payment campaign does not benefit from such a strong organisational core and neither does it have any identifiable public leaders yet. To really embed the idea of non-payment it will require local and public organisation across the country to make the case.

Some say that the lack of a strong grassroots organisation means that the non-payment of energy bills initiative is doomed but I think that is too one sided. After all, if we waited to launch any initiatives until we had a revolutionary organisation of 5,000 people then that would mean we waited for Godot.  However so far Don’t Pay UK hasn’t yet translated into local organisation which is so urgently needed.

A few charity groups and Labour Party types have condemned the Don’t Pay UK campaign for encouraging people to break the law, get into debt and so on. They accuse them of preying on the vulnerable for political gain. These accusations should be largely ignored. It is government policy that has made people victims of the economic crisis, it is profiteering by energy companies that is getting people into debt. Non-payment of onerous bills, prices and costs is part of a natural moral economy for working people, though one they are often penalised for by a legal system geared towards protecting profit and companies property.

During the fight to stop the poll tax thousands of people went to prison for three months for non-payment. Some of these were political activists who saw prison time as merely an extension of the struggle they were waging against the government, but most were ‘ordinary’ working class people, often single mothers, who were sent to prison for non-payment – often by Labour run councils. The movement didn’t imprison them, in fact the movement would provide lawyers and McKenzie’s Friends (lay legal activists who could advise you in court), and organise solidarity protests outside the court.

Transforming a personal crisis into a political one

One key goal of any social movement is to transform a personal or social crisis into a political one that challenges the legitimacy of those in power. An isolated individual faced with the crisis of an unplayable bill is only a personal tragedy, millions of people unable to pay and this being given a political dimension with a campaign is a how you take the fight to the politicians. It creates a crisis of legitimacy, that their economic and political system cannot provide and in fact is source of misery. There is the potential for such a shift to occur now over the cost of energy bills and food, to turn the misery of millions into resistance and defiance.

Simon Hannah is a writer, labour activist and trade unionist. His work has been featured in Open Democracy and New Left Project. He is the author of Can’t Pay, Won’t Pay: The Fight to Stop the Poll Tax, and A Party with Socialists in It: A History of the Labour Left. 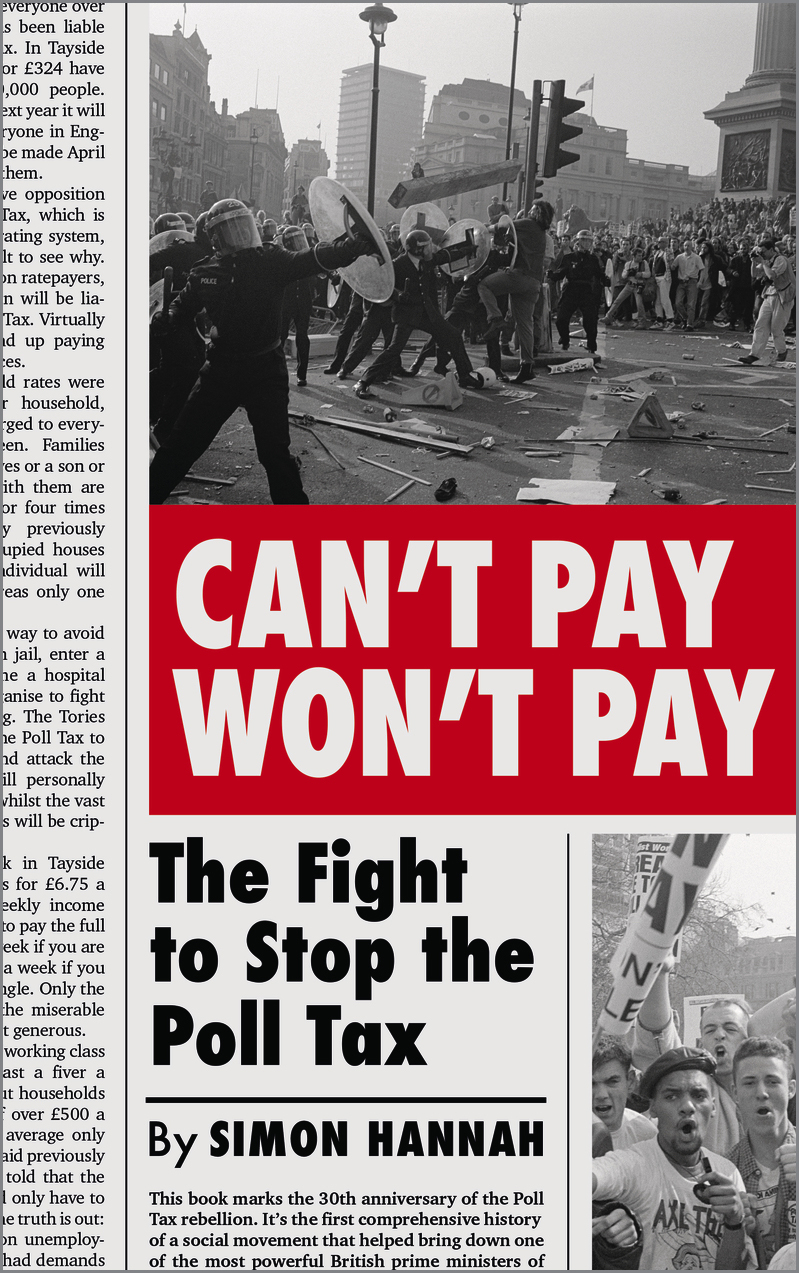